The Moult-Bowman partnership combined to deliver a fine 2-1 win for Motherwell over Hearts on Fir Park’s immaculate surface.  It was a great team effort that will see us through the international break with some cheer.

Although the goals came in the first half, Motherwell had the ball over the visitors’ goal line in the second but the officials were not impressed.  We’ll now have to hope that our prize assets will remain at Fir Park when the transfer window closes on Thursday. 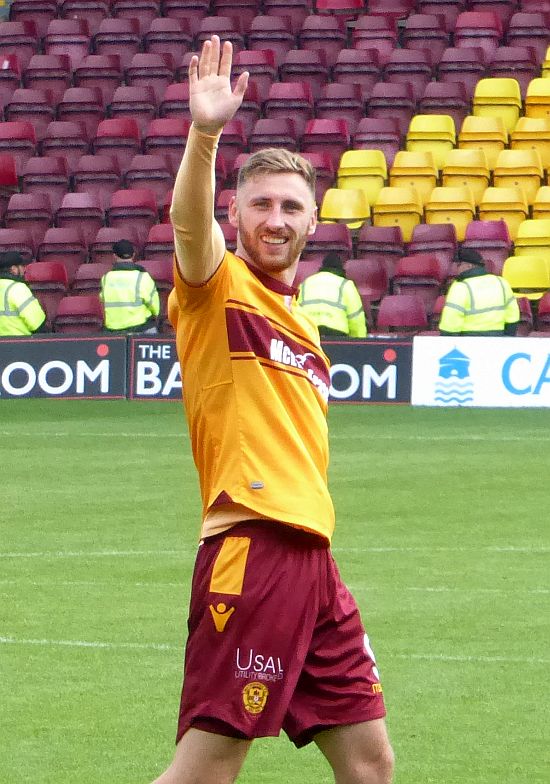 Moult waves to the crowd

The manager brought Carson, McHugh, Frear and Bowman back into the team in place of Griffiths, Bigirimana, Fisher and Tanner and we kicked off facing 2,400 Jambos in the South stand.

There were corners at both ends of the park in the first two minutes and the game soon developed into an open affair.  The first real opportunity came when Moult released Bowman into the area.  His left foot shoot struck Hamilton and bounced to safety.  Hearts replied with an effort from Walker to introduce Carson to the action.

Lafferty opened the scoring after an unchallenged midfield run.  He drove the ball along the turf from 25 yards and Carson was still well short at t found the net at his right hand post.

The lead was cancelled after six minutes.  Tait sent in a cross from the right, Moult headed across the goal and Bowman powered it over the line.

The winner followed in 42 minutes.  It was a beauty Louis Moult.  From around 20 yards on the left side he produced a floating curler that soared over the ‘keeper and into the postage stamp corner.  It was one of his best and might add a healthy bonus to a transfer fee. His farewell wave to the fans as the team saluted the crowd suggested we may not see him again.

We had a huge shout for a third, again from Moult, on the hour.  His headed effort appeared to have crossed the line before Berra cleared it away but the officials were unmoved.  No doubt TV analysis will reveal the truth.

There was a push from Hearts for an equaliser but it lacked conviction and often depended on long rang shots, mainly off target.

The back to back wins places us firmly in mid-table and will go a long way to convincing both players and punters that we have a chance of staying there for the rest of the season.