Motherwell came within ten minutes of taking a point at Ibrox but ultimately lost 2-1 to Rangers.  Devante Cole opened the scoring but goals conceded late in each half resulted in a home win.

The small band held in the away corner of the stadium at the end of the match stood to applaud their team for the valiant effort they had delivered.  They kept the game alive late into the second half and left nothing on the park. 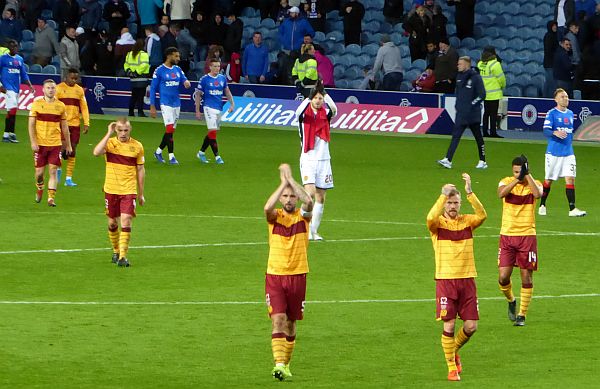 Stephen Robinson made four changes to his starting eleven. Bevis Mugabi, Liam Donnelly, Jake Carroll and Devante Cole were chosen ahead of Sherwin Seedorf, James Scott, Richard Tait and Barry Maguire.  We lined up with two strikers adopting a pressing role, five in midfield and an impressive back three.

Chris Long had the first chance of the match but his blast from the edge of the box flew high.  As expected the home side had most of the possession but they fashioned few early opportunities.

We took the lead after twenty minutes when Cole collected the ball with his back to goal.  A swift turn and shot beat McGregor and we drew confidence.

Our three central defenders offered a solid wall to the waves of blue attacks.  Mugabi slotted in seamlessly alongside Hartley and Gallagher and he can be delighted with his starting debut.

Rangers were awarded what looked like a soft penalty (surprise!) when Liam Polworth was harshly judged to have impeded Tavernier at the edge of the penalty area.  Justice was served when the same player struck the base of the post with the spot kick as Mark Gillespie elected to guard the other half of his goal.

The fourth official had indicated three added minutes at the end of the first period before we conceded.  Defoe escaped punishment for a foul on Liam Polworth before feeding the ball to Davis.  The midfielder dispatched a fierce effort that was parried by Gillespie.  Unfortunately it fell to Defoe and he shot low into the net.  The goal would change the half time talks of both managers.

Robinson made a couple of substitutions before we lost the vital goal.  Helander rose in the packed penalty area to head across Gillespie and into the net.  The stadium clock showed 80 minutes as the home crown celebrated.

There was a spirited attempt to snatch a point but no success.  The game was lost but Motherwell heads were high.

Attention now turns to the visit of Kilmarnock on Wednesday for a meeting of third and fourth.