“They did themselves proud.  I told them to leave the dressing room with their heads up and their chests out” – Terry Butcher at the end of today's game at Hampden.

In a great game at the sun drenched national stadium the Mighty ‘Well came mighty close to making the final.Despite giving the pre match favourites a goal of a start we fought back and held a one goal lead at the break but Rangers grabbed three in the second half to our one and we ran out losers in a 4-3 thriller. 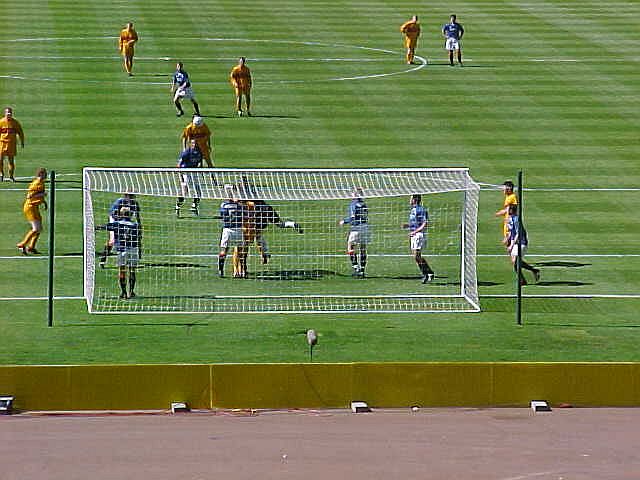 Terry dropped Lehmann in favour of a front pair of Clarkson and Craig.McFadden sat in behing them and it was clear that we were going to attack at every opportunity.Pearson had a wonderful game and deservedly collected the Man of the Match award from the sponsors.His direct running caused mayhem in the Rangers’ defence.

Konterman was presented with a chance before two minutes had elapsed.He lasted the ball from the edge of the box and the power of the shot beat the outstretched arms of DuBordeau.The response from the magnificent ‘Well crowd was immediate.Thousands rose to their feet and helped to lift the spirits of the team.

For the next fifteen minutes we ran the show.Our trademark style of direct running and pressing allowed us to control the flow and the spell deservedly produced the equaliser.

Corrigan intercepted the ball on the half way line and after a few strides he released Clarkson with a smashing pass inside the box.In front of the ‘Well support the seventeen year old squared to Stephen Craig who slotted home from close in.

There was more cheer just before the half hour.Pearson set up McFadden on the right hand side of the box and his curling shot flew past the right hand side of Klos.We had recovered from the early disaster and had now taken the lead.And we merited the lead. The cup holders rarely threatened and it looked as though another goal from the ‘Well could kill the game. 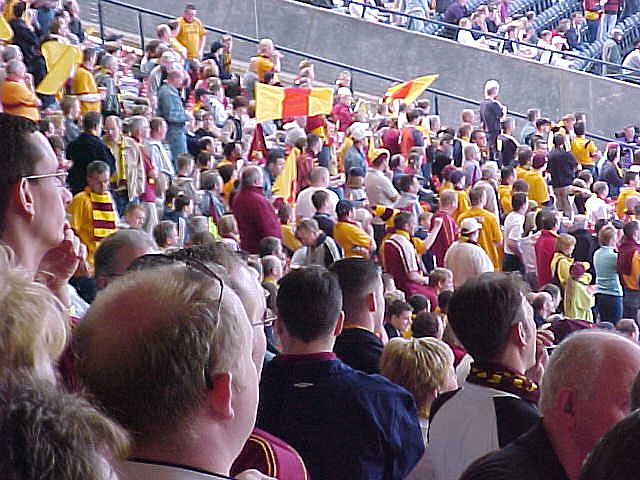 In forty minutes we had the chance.Clarkson met Craig’s square pass across the face of the goal inside the six yard box.‘Well fans were on their feet anticipating the goal but the ball passed the post on the wrong side.There were gasps and sighs on and off the park – a golden chance missed.

The second half saw the expected push by the poor Rangers side.And the game turned around ten minutes after the restart.Thomson (a half time substitute) fed Mols on the right hand side of the box and his shot sound the net.We had hardly regained our composure when Amoruso headed a free kick into the net.Suddenly we were behind in a game we were controlling.

The killer came in seventy minutes.A cross from Muscat closed in on the right deflected off Partridge and into the net.We were four-two down and out.

We pegged away and Adams got a consolation with the last kick of the game.

Pearson, in a post match interview, described the atmosphere in the dressing room as dejection.He felt that the better team had lost.

The players took the grateful applause of the travelling ‘Well fans at the end of the game.Hardly any of our fans had left as the game came to a close and the show of support for the team expressed gratitude for their efforts.

If we can take the same attitude into the last six games of the SPL season we will not finish on the bottom.