There is a clear gap in class between the teams but, as the manager said after the match, "That's as good as we've played at Celtic Park".

Francis-Angol came into the side to replace Ramsden who is recuperating following his knee operation.  Otherwise it was the team was that won at Tynecastle that kicked off.  Hammell filled the vacant right back position with Francis-Angol taking the left defensive slot. 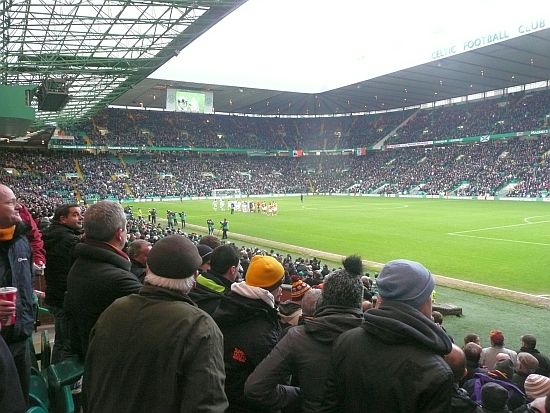 Nielsen was in early action and double fisted a Commons free kick to safety.  The manager's match plan received a severe dent when, with barely five minutes on the clock we conceded the first goal.  Stokes fired low from the left of the box and Commons pounced on the keeper's parry for an easy finish.

It looked like we might be overrun as we failed to cope with the pace and passing of the home side but we kept them out and eventually started to probe their defences.  McFadden produced a piece of magic when he pushed the ball one side of his man before collecting from the other.  A decent cross followed but Sutton couldn't make contact.  Faddy then delivered a fine pass to Ainsworth and a low shot forced Forster to touch for a corner.

We were holding our own and might have reached the break only one behind but Stokes fell after the slightest of touches from Nielsen and referee Madden pointed to the spot.  Commons blasted the spot kick high into the net.

Although we lost another goal when Stokes' shot was deflected into his own net by McManus to make the score 3-0, we had plenty of good possession and made several excellent chances.

McFadden had the best of them when the ball fell to him only seven yards out.  It seemed certain he would score but his weak effort hit Foster on the leg and the travelling band of Motherwell supporters had to resume their seats as the long run of goalless games at Parkhead continues.

Results elsewhere soften the effect of the defeat and we can look forward to a six pointer when Aberdeen come to Fir Park next week.