A much weakened Motherwell side were completely outclassed by St Johnstone and the 3-0 loss at Fir Park hardly reflected the balance of play.

It was an instance of men against boys and the result was never in doubt.  St Johnstone could not have dreamt that their preparation for next week's League Cup final would have been so easy. 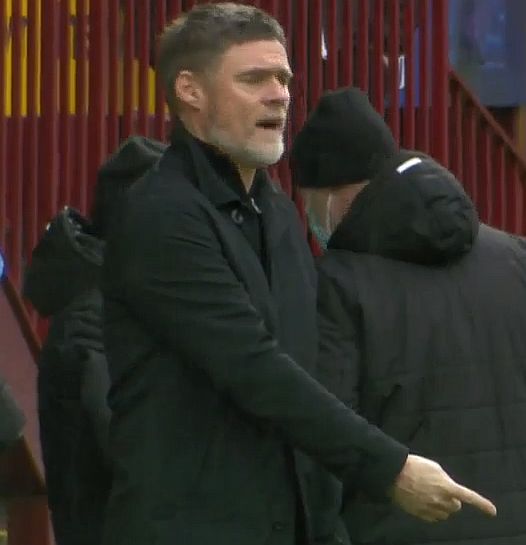 A man with a problem

Illness, injury and suspension caused the omission of Alan Campbell, Mark O'Hara, Bevis Mugabi and Stephen O'Donnell.  As a result first starts were given to Max Johnston and Tyler Magloire. Robbie Crawford and Liam Polworth were also recalled.  Only seven of a possible nine substitutes were listed.

It is no exaggeration to say that Motherwell were overwhelmed and fortunate to get to the break only two goals down.  Apart from a corner and a long range shot from Liam Polworth there was no pressure of the visitors' goal.

St Johnstone took control from the off and the makeshift defence held for the first twenty minutes.  Guy Melamed collected outside the box and despite the attentions of Jake Carroll and Ricki Lamie his shot flew into the home net.

There followed an avalanche of chances for the Saints as they exploited the inexperience in the Motherwell ranks.  It seemed like the safety of the dressing room would be reached without further loss but Jason Kerr smashed a shot into the net after what looked like an unlikely escape.

Any hope of an unlikely revival disappeared a few minutes into the second period.  Polworth conceded a penalty with an ill-judged block on Kerr and Melamed gave Kelly no chance with the spot kick.

The manager made a triple change on the hour but it had no effect of the game.  It was no surprise that the online commentary was unable to announce a Motherwell man of the match.

The statistics on the BBC website reveal that Motherwell had 1 shot at goal while the visitors has 22.  That sums up the gap between the teams.

Let's hope that several of those missing today can start the game in Paisley on Wedndesday.