Hamilton gave us a goal of a start before they romped to a 3-1 win at Fir Park.  Motherwell frittered the game away with a series of defensive errors and an attack with no punch.  The purse strings will have to be loosened in January.

It all started so well.  We were a goal up and overwhelming the visitors in the opening ten minutes but the Accies defence survived without further loss.  A soft penalty before the break levelled the game.  Another poor second half display ended the contest. 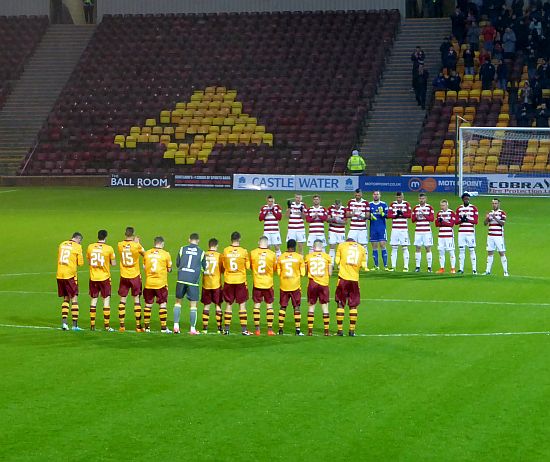 The defeat extends our winless run to eight league games with only two points and six losses.  Our early season comfort buffer has now disappeared and our fate now rests on the January imports.  Let’s hope we find the right men.

There were four changes to the Motherwell team.  Grimshaw, McHugh, Fisher and Dunne muissed out as Hammell, Bowman, Campbell and Newell stood in. The crowd responded well to the minute’s applause on the tenth anniversary of the passing of Phil O’Donnell kick off.

We pushed forward from the off and Bowman had a double chance to score in the second minute.  But our celebration was not long delayed as Tanner slid in at the near post four yards for the opener thanks to Bowman’s good work.

There was little goalmouth action at either end until Crawford’s shot into the crowded penalty box caused referee Dallas to award a penalty.  He indicated that Hartley’s arm was high when the ball deflected but to these in the home stands it seemed to be a harsh decision.  Imrie made no mistake from the spot and the teams were level at half-time.

Bingham pounced on a horrible mix up between Hartley and Kipré and ran forty yards into the box before firing low into the net.  Hamilton hardly deserved the lead but we never looked like recovering.

FIsher replaced Rose and later MacLean replaced Newell but during the entire second half Woods was not tested in front of the Cooper Stand.

Docherty ended the contest when he was allowed to run into the area.  Carson was beaten and the game was lost.

We cannot criticise the players for effort.  They pushed hard to get back into the game but a combination of steely defence and weak finishing delivered the visitors with three points.

The manager had all his available strikers on the pitch at various times but none rated pass marks.  Tanner looks like a prospect but he’ll be hoping that a few more clinical team-mates are available when we meet the same opposition at Fir Park in the Scottish Cup in January.