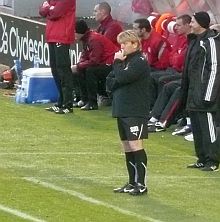 We actually started reasonably well and found it easy to keep possession.  Ball retention in the Hamilton half brought us very little though and throughout the whole period Cerny was called into action only once to save a decent hit from Blackman.

Craigan also sent an impressive half volley just over Cerny’s bar but Hamilton soon started carving out chances despite seeing little of the ball.  The impressive Imrie shuffled away from our defence and Randolph had to look sharp to save his dipping shot across goal before McDonald headed wide at the back post when he should have done better.

Hamilton had Imrie to thank for their next chance when more brilliant work on the left produced a cross which Paixo headed over the bar with Randolph scrambling to cover his looping effort. 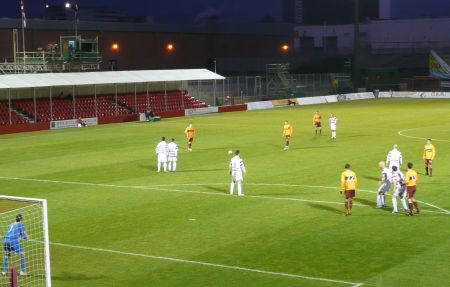 A 'Well free kick in the second half

It was suggested at half time that things could only get better after the restart but this proved to be optimistic. Hamilton suddenly looked more composed on the ball although their better play did not produce many chances other than a handful of long-range efforts which failed to trouble Randolph.

Motherwell gradually came back into things but despite a spell of late pressure opportunities remained elusive. Murphy’s cross was deflected towards goal but a marvellous/lucky save from Cerny turned the ball onto the bar and to safety.

After more huffing and puffing Hamilton should have won the game late on when diabolical defending allowed Imrie to race clear but he sent his shot beyond both Randolph and the far post meaning the points were shared.  It was probably a fair outcome from a poor game.