It was a very disappointing performance from Motherwell but we need to give credit the opposition.   We hardly had a shot on target while our hosts seemed to have dozens.  The home crowd were serious when they chanted “We want six!”. 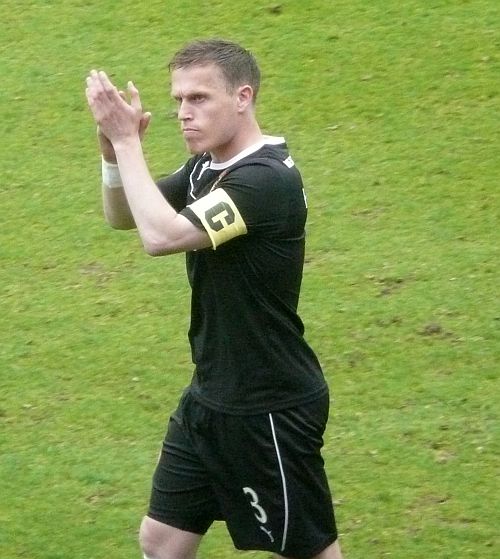 Motherwell lined up with one change from the eleven that drew with Celtic, Francis-Angol was benched as Lasley returned after his suspension.  Hammell retained the captain’s armband to mark his 500th appearance for the club.

The game set off at a cracking pace with both sides eager to push forward.  Our attacking intent was clear in the first few minutes when Lasley took a quick free kick that allowed Hammell to whip in a ball that Kerr headed just wide of target.  United had more success with their first attack.  Ciftci set it up with a deceptive move on the halfway line.  He sprinted to the 18 yard line when Armstrong collected and the striker completed the move with a well placed shot to Nielsen’s top rioght hand corner.

We escaped moments later when Paton beat our ‘keeper with a lob but McManus saved the day on the line.  United were in control and looking dangerous.   A quick pass set Ciftci up with a one on one chance but Nielsen produced a a fine save to keep us in the game.  Our response was a few hopeful long balls to Sutton and Anier.

Lasley saw yellow in conceding a free kick at the angle of the box but our wall dealt with Ciftci’s shot.  Stuart McCall had a few harsh words from the touchline as  we struggled to reach the break without further loss.  Unfortunately United had other plans and after 40 minutes they were two up.  A cross field pass gave Armstrong the freedom of the left wing and he picked out Ciftci for a first time finish that gave us a huge task for the second half.

Anier and Kerr were dumped at the break as Moore and Ainsworth were introduced.  The plan almost produced the perfect start when the ball fell kindly to Lasley only 6 or 7 yards from goal but his strongly hit attempt flew over the top.  Ainsworth followed with a wasted effort from 15 yards within two minutes.

Our pressure was short lived and we fell foul of Armstrong’s pace on the hour.  His 30 yard run left our defenders in his wake and although Nielsen get a hand to his shot it finished in the net, 3-0.

Another couple tumbled into the net on 70 and 80 minutes.  Again, pace and good finishing were our undoing as substitutes Gauld and Graham added to our misery.  Ainsworth gave the travelling fans something to cheer in the final minutes when his deflected long range attempt beat Czierzniak.

Can we write the experience off as a bad day at the office?  We’ll find out next week when St Johnstone come to Fir Park.