Faddy and Sutty deliver the goods for 'Well

Both teams were unchanged from earlier wins but it was the home team that created the better goal scoring opportunities.  Motherwell’s goals followed powerful shots parried by Brown that offered simple conversions for our front men.  Songo’o gave the visitors hope inside the final ten minutes but we held on deliver some cheer for Lasley’s testimonial dinner. 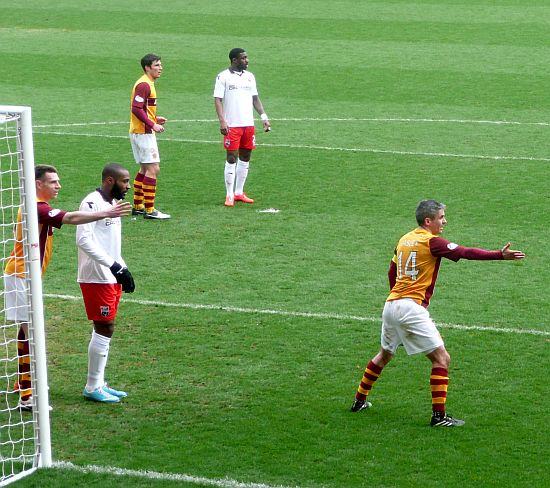 We had some decent passages of play in the first period as County dug in.  Our steady build up tended for result in a decisive touch from McFadden in the centre.  Indeed Faddy probably should have scored at the South Stand end.  He had a header from an Ainsworth cross off target and later he forced brown into a dramatic one handed save from close in after a Sutton knock down.

The best chance of the half fell to Slew when he had time and space inside the box but his effort was blasted well wide of Nielsen’s left hand post.  Lasley had a couple of chances to raise the roof on his special day but the fates were not on his side.

We took the lead two minutes into the second period when Vigurs’ showed the value of a powerful strike on target.  From twenty five yards the midfielder, his contribution becoming increasingly valuable with each game, released a low drive that Brown couldn’t hold.  McFadden pounced and celebrated the simple finish.  He lasted a further ten minutes before seeming to limp off as Moore replaced him.

The second goal was almost a replica.  This it was Moore with the shot from the edge of the box and with a swerve.  Again, the keeper failed to hold and Sutton was on hand to deliver the two goal margin.

It seemed that the game was over as a contest.  Ross County huffed and puffed but it looked unlikely that they could recover.  A corner after 82 minutes gave them some hope and when Songo’o converted Carey’s corner the home support knew they were in for a nervous ending. There were a few scares but we held on for a deserved victory.