Motherwell and Hearts put plenty of effort into a 1-1 draw at Tynecastle.  Chris Long gave us a first half lead but Conor Washington levelled the game early in the second period.

A share of the spoils was probably the correct outcome in the hard fought contest that saw few silky skills but plenty of commitment. 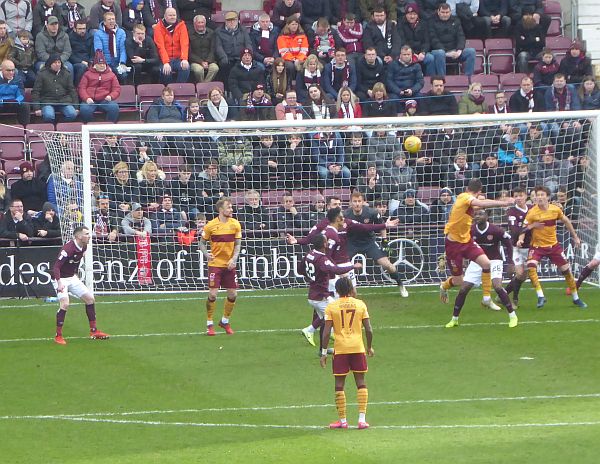 As expected Motherwell started with the same eleven that had beaten Ross County in midweek and Liam Polworth kicked off proceedings into the stiff Edinburgh breeze.

Hearts failed to capitalise on Motherwell’s early defensive errors.  We were unsure and indecisive and at times unwilling to take the simple route into the stands.  Mark Gillespie charged well out of his box to clear but the ball fell to Sean Clare at the half way line.  He punted high and long only for the chest of Allan Campbell to prevent a goal.

Campbell had to be substituted midway through the half and Barry Maguire took up the challenge.  We were ahead within two minutes.

Craig Halkett was robbed by Long on the centre spot and charged to the Hearts goal.  He rounded Zlamal and fired home from a narrow angle. We should have doubled the lead when we piled forward with four against two defenders.  The ball eventually reached Hylton but the attack ended with an unanswered penalty claim.

Hearts took the early initiative after the break and after a short corner they equalised.  Naismith was the provider as he delivered a low cross to find Washington at the near post.  The big home crowd took heart and hoped that the game had turned.

The game raged end to end with Motherwell’s threat coming on the break.  Liam Grimshaw powered up the right wing and crossed to give Long a chance that the ‘keeper parried.  Jermaine Hylton received but his shot was weak.

Ronaldo Aarons and Hylton worked hard throughout and combined with the energetic Long to keep the home defence occupied.  Hylton almost won the game with a fierce shot that arrowed to Zlamal’s right.  The ‘keeper did well to deflect for a corner.

David Turnbull was given another 20 minutes game time when he replaced Liam Polworth.

Six added minutes were needed to cope with the injury stoppages but the game ended with a fair share.