It was fitting on the day that the club paid respects to the passing of our great centre half Andy Paton, that one of his modern day replacements, Stephen McManus, should score the winner.  After a first half that ended a goal apiece the game exploded in the second period and both sets of fans thought their team were going to claim the spoils. 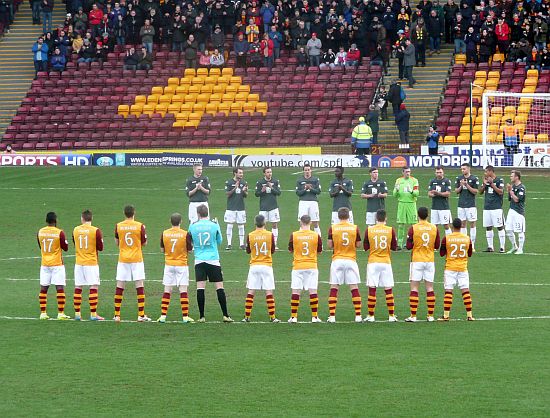 We reverted to our emergency back four line up with Hammell on the right and Francis-Angol on the left but as the game settled down Thistle seemed unwilling to push down the flanks with only Taylor leading their line.  They concentrated on keeping their defence strong with a couple of lines protecting Gallacher in front of the South Stand.

We had the best of the first half hour with McFadden, Vigurs, Ainsworth and Lasley having attempts on goal.  Thistle started to probe our defence and they were rewarded with a fine goal as a passing move ended with Erskine in space 10 yards out  He calmly stroked the ball beyond Neilsen and we were one down against the flow.

Lasley (with the help of a looping deflection off Higginbotham) equalised within five minutes.  His shot from some distance sent the teams for the break on level terms.

The second half saw both teams determined to push forward at every opportunity and the game raged from end to end.  Motherwell took the lead with a great two man move.  Ainsworth surged though the centre and passed to McFadden on the right wing.  The ball was returned and from the edge of the box Ainsworth swept the ball into the net.  We had the lead and many in the home stands felt that we would go on to control the game.  The visitors had other ideas.

Higginbotham, spurred on by the 'encouragement' from the East Stand, had a golden spell that started when Ainsworth fouled him to concede a penalty.  Our ex-player level the game from the spot.

He followed that up with a terrific run that started when he escaped the attentions of our midfield and charged into the box.  From a very narrow angle he beat Neilsen and the Thistle support were on their feet.

Twenty minutes remained and we fought to get the leveller.  Faddy hit the side net then McManus forced Gallacher to produce a great touch over the bar from a powerful header.  Anier replaced Vigurs  and we entered the final fifteen minutes.

Ainsworth delivered a perfect cross from the touchline and Sutton placed the header well away from the 'keeper.  We were back in the game and looking for the winner.

With a couple of minutes on the clock Hammell took a free kick from his wide right position.  The curling delivery found McManus at the far post and his header flew into the opposite corner to cue wild celebrations on and off the pitch.

It was a breathless, hard working performance on a very sticky surface but we have now taken nine points from Thistle to stay on the heels of Aberdeen.  Next up is Dundee United on Friday.