A  disastrous defending display in the first half gave Motherwell a three goal mountain to overcome but despite Bowman and Tanner scoring Patrick Thistle deserved their 3-2 win.

The Thistle manager had called his defence comical after their heavy defeat in Kilmarnock but our lot grabbed that description after a series of blunders midway through the first period.  The second half recovery was spirited but unsuccessful. 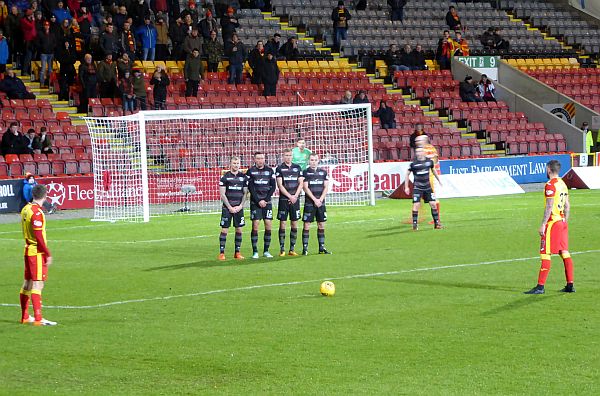 We lose the first goal here

Cadden and Fisher dropped out of the starting line-up making room for Petravicius and Grimshaw.  Thistle kicked off and set about their task with gusto and soon had us struggling.

We managed to concede three times in the middle of the half in a ten minute spell of defensive chaos.  All of this without us managing a shot on target until the 44th minute.

McHugh was harshly punished for a tackle on Sammon at the angle of the penalty area.  Spittall thumped the free kick over the wall and Griffiths failed to make contact as the ball crashed into the net.

The second followed a charge up the park from Dunne.  The defender crossed the halfway line, looked up for the pass and promptly rolled the ball to a red and yellow jersey.  We were caught out of position and the ball was soon in the net thanks to a clinical finish from Edwards.

Worse followed four minutes later.  McHugh was too easily dispossessed in the right back area and Sammon found himself with only the 'keeper to beat.  No problem.

Dunne might have pulled one back before the break but he headed Frear's chipped ball into the ground and wide of the post from 7 yards.  That was our only close effort in an awful first period.

Bigirimana and Tanner joined the fray as Robinson was forced to roll the dice at the interval.  Rose and Grimshaw took the early showers.

After suffering a first half humiliation it was a different Motherwell team that turned up too late.  We played with urgency and commitment.  We pressed when out of possession and forced Thistle deep at every opportunity.  If only we had started the game with that attitude.

An early goal was disallowed after the ball had been placed back on the centre spot but Bowman powered in our first within two minutes.  Much of our play was channeled via Frear and the winger had a good 45 minutes.  Crosses poured into Cerny's area and there was a sense that we might pull them back.

Tanner gave the 568 'Well fans reason to believe when he dribbled into the box to power a low drive into the net.  3-2...game on.

Thistle managed to see out the game without further loss.

The manager expressed his disappointment at the individual mistakes that cost us the game.  So did we all.