Motherwell scored four without loss against Morton to take a commanding lead in their Betfred group.  A double from James Scott and singles from Jermaine Hylton and Liam Donnelly cheered the three thousand ‘Well fans. 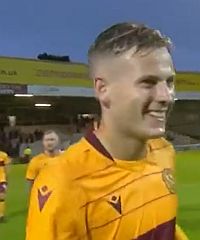 We lined up with four changes from the eleven starters in Dumfries.  Sherwin Seedorf, Jermaine Hylton, James Scott and Liam Polworth joined the team as Fir Park opened for business for the first time in the new season.

The visitors had the first opportunity after five minutes.  Charles Dunne lost his man but the Cooper end goal remained intact as Grant missed his easy chance.

That scare seemed to spur us on and we took control. Ramsbottom was to become a busy man in the Morton goal.  Scott had a shot parried on 15 minutes before our wingers piled on the pressure.  Some magic from Hylton resulted in a shot from Carroll.  Scott should have directed the ball into the net but he poked the ball over the bar.

Seedorf was in excellent form on the left and had shots with either foot testing the ‘keeper.  The winger’s pace was key when he latched onto a through ball to run deep.  He spotted Scott and set up a simple tap in to give us the lead after 22 minutes.

The 18 year old striker should have doubled his tally but his indecision at the edge of the box was costly.  Mark Gillespie’s legs saved some embarrassment just before the break when he blocked a Nesbitt effort.

The visitors showed more determination as the second half got underway and the game was short of goalmouth action for a spell.  But as the floodlights grew stronger in the darkening sky we pushed forward.

Scott tested the ‘keeper from 25 yards before a set piece corner offered Seedorf a shot.  Scott got the second after 66 minutes with a twelve yard shot to give some breathing space.

We added a couple as the game drew to a close.  Hylton showed neat footwork  and a well placed finish for the third before Donnelly blasted through a ruck of players for the fourth.

We have a seeded place in the next stage in sight as long as there are no slip ups in the next couple of games.  The first of those is at Dumbarton  on Tuesday.