Motherwell helped Hearts to a 2-0 win with an error strewn showing at Tynecastle.

After a half hour there was nothing to choose between the teams but careless loss of possession inside the penalty are gave Hearts the opener. Another gift followed ten minutes after the break and the contest was over.

The new signings Ross Tierney and Liam Shaw were given starting places and had contrasting fortunes.  Tierney shone in the first half with a series of first time touches but Shaw seemed to be a yard off the pace. 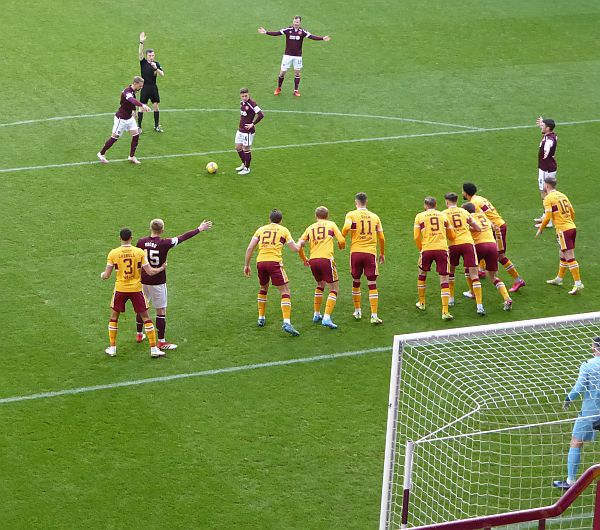 Liam Kelly was penalised in the third minute for a pass back offence. Craig Napier was the only one in the stadium who reckoned that the ball from the centre circle was deliberately passed to the ‘keeper.  Forunately Hearts were unable to convert.

Kevin Van Veen attemped a pass to Craig Gordon’s left corner but missed by inches then Jordan Roberts placed a cross of his head.  Unfortunately the header from the six yard line missed the target.

The loss of the goal was a self-inflicted affair.  An attack had faltered and with the ball at defenders’ feet possession was lost. Andy was presented with a chance from and unmarked position on the right  of the box and he placed the ball beyond Kelly.

The second goal early in the second period came after Liam Shaw dithered in the cntre circle.  The ball was stolen from him and with a quick break Ellis Simms tapped into the net.

Craig Gordon did not have a save to make until Justin Amaluzor tested him in the dying minutes.

Motherwell worked hard but were short of ideas moving forward.  Without the gifts to the opposition a point might have been earned but there can be no complaint at the result.

Kind results elsewhere made no dent in the league position.  Next up is a trip to Paisley on Tuesday.