Motherwell crumbled to a 3-0 defeat at Hamilton as Keith Lasley witnessed the magnitude of the task that lies ahead.

Another weak and toothless performance allowed the Accies to move up the table as Motherwell dropped to share the basement place with Ross County.  The team may have been affected by suspension and injury but there was no excuse for the mistakes at the back or the lack of threat up front. 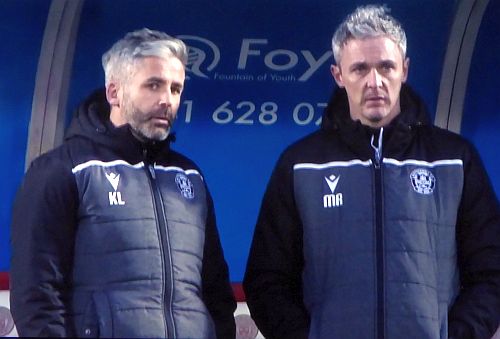 What do they do now?

Lasley made four changes in his first game in charge.  We set up with Stephen O'Donnell, Declan Gallagher, Bevis Mugabi and Jake Carroll at the back.  Liam Polworth played in the centre with Alan Campbell and Liam Grimshaw for company.  Jake Hastie patrolled the left flank with Devante Cole and Tony Watt looking for scoring chances.

The interim manager saw his side lose a goal after ten minutes.  Lee Hodson had the freedom of the right side of the pitch and from the 18 yard line he was able to collect and steady before driving low to Aaron Chapman's left.  The ball passed under the 'keeper on its way into the net.

Chapman seemed rattled by the loss and caused a few scares in the aftermath.  His uncertainty soon spread to his fellow defenders. Hamilton coped comfortably and smothered Motherwell attacks.  Gallagher produced a header that struck the post but the assistant had flagged.  The best chance of an equaliser before the break came with a long range effort from Polworth but Kyle Gourlay coped well.

Hamilton's second came four minutes into the second half.  Moyo's cross was missed by Mugabi and Ross Callachan was presented with an unexpected opportunity.  He sided footed the ball from the edge of the box and Chapman had to pick the ball from the back of the net.

The gloom deepened when Callum Smith headed a cross in off the post to give the hosts a three goal lead.  Lasley must have felt the crushing weight of the task he has accepted.

Substitutes came on to no effect.

We managed a few shots on target but any goal would have been a consolation at best.

Hamilton were worthy winners and the showing will give the Motherwell board more cause to consider the actions needed later this month.  Lasley can hardly be blamed for the shocking display but there were no signs to suggest that the current squad are about to produce a dramatic change in fortune.

The game in Paisley next Saturday assumes even greater importance.