Motherwell took a well deserved point at Tynecastle in a game which provided plenty of incident and entertainment. Foran missed a penalty on the stroke of half time. 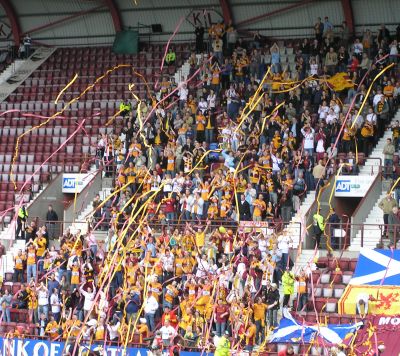 The latest mix in team composition saw Corrigan and Quinn restored to the full back positions with Partridge and captain Craigan in the centre ahead of Marshall in goal.The midfield looked makeshift with Foran, Fitzpatrick Kerr and Fagantaking post with Clarkson and Hamilton up front.Only five substitutes were listed.

We settled into the game quickly and relied of passing our way forward more than the recent pattern of long balls to the strikers.Burchill caused a bit of a stir when he fired into the side but goal chances were few and far between. 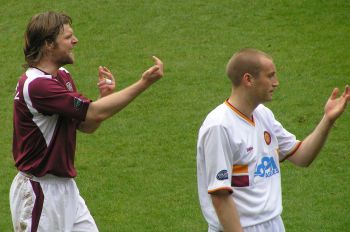 There must be a caption competition here?

Hamilton saw a chance to rob a slow footed defender and his shot was well saved by Gordon.The pair were to feature on another couple of occasions before the half time break.

Mikoliunas drew a great save from Marshall as his header looked net bound.Our keeper got his right arm fully extended to block the ball at the base of the post.

Hearts had a threatening spell of pressure towards the end of the first period but we almost broke the deadlock when another fierce shot from Hamilton, this time a curling left footer from twenty yards, was stopped by a fine save.

As the half reached the last few seconds we were awarded a free kick and, from distance, the ball was punted high into the box.As defenders and attackers rose to head the ball a fist, at the end of a maroon arm, cleared the ball.The referee awarded a free kick but the assistant indicated that the offense had taken place inside the box.Foran stepped up and hit the post.Even had the ball been on target Gordon had a hand in place and it seemed unlikely that we would have had the half time advantage.

Both teams seemed more aggressive after their pep talks and suddenly they both had the belief that a goal would be enough to secure the points.Both keepers were active but the chances were not clear cut.Fagan had a blast from the corner of the six yard box and Clarkson had a twenty three yard volley on target.

With twenty minutes remaining both managers made alterations.Paterson replaced Fagan after the youngster had misplaced one pass too many and Hearts responded by substituting Wyness for Burchill.

Tempers began to rise and the tackles became fiercer.Hamilton worked hard in attack and defence and Clarkson kept chasing.Keogh came on for Foran and the deadlock remained.Hearts got stronger in the closing minutes and threatened with a series of free kicks.As the fourth official indicated two additional minutes Marshall demonstrated yet again why he intends to be number one next season as he tipped a fierce attempt over the bar.

The game finished goalless and we remain unbeaten by Hearts in 2004/5.We may give Hibs a surprise at FirPark next week!