Huge win for 'Well in Hamilton

Motherwell took a massive three points with a 1-0 win at Hamilton to move off the play-off spot. It was a rotten game of football but that mattered little to the 2,312 'Well fans who cheered the team all afternoon.

It was a close fought affair that could have gone either way but we got the break when Moult's header sneaked into the net just after the hour. There were a few nervous moments in the closing minutes but steely determination won the day and we now have a three point advantage over our neighbours. 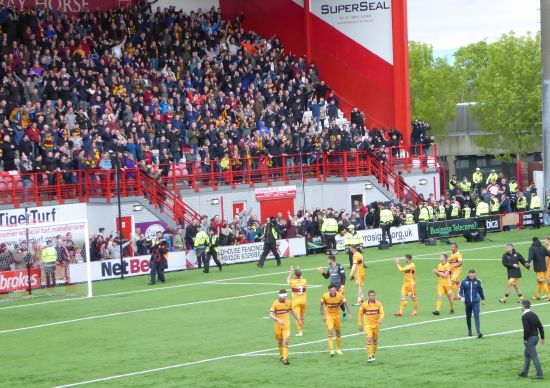 Robinson elected to make just one change from the previous week's failure against Ross County. Ainsworth moved to the bench and Clay started. Griffiths kept his place in goal.

There was an exchange of tasty free kicks in the opening minutes. Crawford shot high into the Motherwell crowd packed into the away stand before Moult tested Matthews from the angle of the box. The referee was a busy man as he penalised every infringement. There was no doubting the yellow card issued to Devlin when he scythed Frear on the break.

Next came a few missed chances. Moult laid the ball on for Clay but he pushed wide from 18 yards before Crawford scooped over the top from 15 yards and on 25 minutes Clay fired beyond the other post.

It was a scrappy, disjointed game with few chances for ball players to show their skills. Prevention of mistakes seemed to dominate players' thoughts.

We reached half-time with half a dozen bookings. McDonald and Lasley managed to get themselves booked for simulation and dissent while McHugh, Campbell, Devlin and Crawford used the physical route.

A magnificent save from Griffiths kept us in the contest early in the second half. D'Acol shot from ten yards but our man stood tall and we escaped with a conceded.

In 65 minutes we too the chance to substitute Ainsworth for Lasley while Frear lingered over a free kick. The change was made, the kick was delivered and Moult headed us into the lead. It was technically not the best header our striker has ever delivered but it was celebrated like a world cup winner.

Eventually there were ten bookings in what was not a dirty game but in a tense afternoon Motherwell managed to get over the line. There remains more work to be done but this was a big step toward survival.