Johnson takes Motherwell to the quarters

Motherwell reached the quarter finals of the Betfred Cup with a 1-0 win over Livingston.  Danny Johnson got the goal in an exciting first half.

There were three changes to the Motherwell team as they emerged from the tunnel clad from head to toe in claret.  Cadden, Campbell and Sammon made way for Gorrin, Johnson and Frear on the new artificial surface.  Rubber pellets sprayed up with almost every step and bounce. 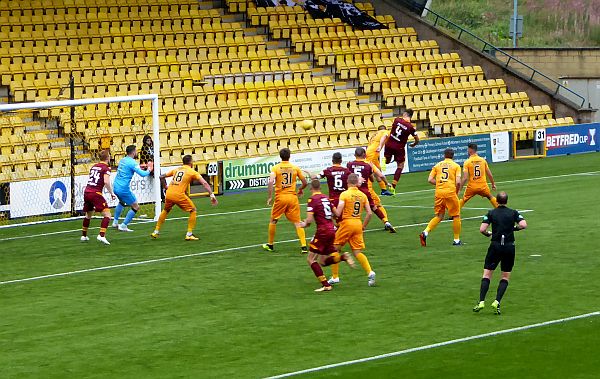 The game started with a flurry of chances at either end.  Lawless rattled our bar and Kenny Miller forced Carson into a tip over the top.  We forced a couple of corners before Johnson burst into the box to unleash a cracker that struck the junction of post and bar.  The Bigirimana delivered a curling free kick that was cleard off the line.  All this inside ten minutes.

The game kept producing chances.  Lee Miller’s close range shot skimmed the outside of the post then Frear delivered a perfect cross for Tait to head.  It seemed that a goal was certain but Kelly produced a great stop.

The opener soon followed.  Main was the supplier of a low cross and Johnson slammed home.

McHugh almost extended the lead when he connected with Bigirimana’s corner but the ‘keeper produced another fine save.  Main almost bundled the ball over the line a couple of minutes before the break but, again, Kelly managed to keep the ball out.

The second half was always going to have a hard job in offering the same number of shots on target as the first.  After an hour Campbell replaced Gorrin and five minutes later ATS replaced Hartley.  In the interim Campbell produced a marvellous turn to beat two defenders and his shot had the travelling fans off their feet but it struck the post with Kelly beaten.

Johnson left the field to a warm round of applause from the away fans and Sammon joined the attack.

We did more than enough to ensure a place in Sunday’s quarter final draw.  Johnson’s inclusion gave us more variety in forward areas and Bigirimana gave us composure in midfield.  Now all we need is a home draw,.