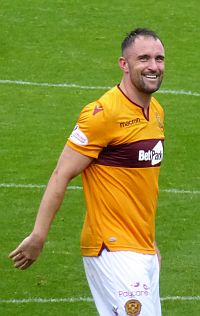 Motherwell showed many of last season’s best qualities and matched Rangers to earn the first point of the season.  Goals from Johnson, McHugh and a last minute equaliser from Hartley pave the way to a 3-3 draw.

We led twice but were behind at the break before the captain Hartley snatched the goal to end the action in a thrilling six goal encounter in front of almost 10,000 at Fir Park.

The floodlights were on from the explosive start and the game continued at high pace until the explosive end in the fourth minute of added time.

The new scoreboard showed only 2 elapsed minutes when Goldson lost his footing of the wet surface and Johnson pounced.  He had time to run in on McGregor and placed a controlled lob over his head to give us the perfect start.

Johnson could have scored a second in 14 minutes but McGregor stretched a hand to block his effort.  The first equaliser followed.  Lafferty, his battles with our back three a feature of the match, tried his luck from 20 yards and a big deflection off Tait sent the ball into the net with Carson going the wrong way.

Any thoughts that we would submit were soon answered when Bigirimana sent in a tempting free kick in 17 minutes.  McHugh rose above the ruck to place a header high into the net.  2-1. 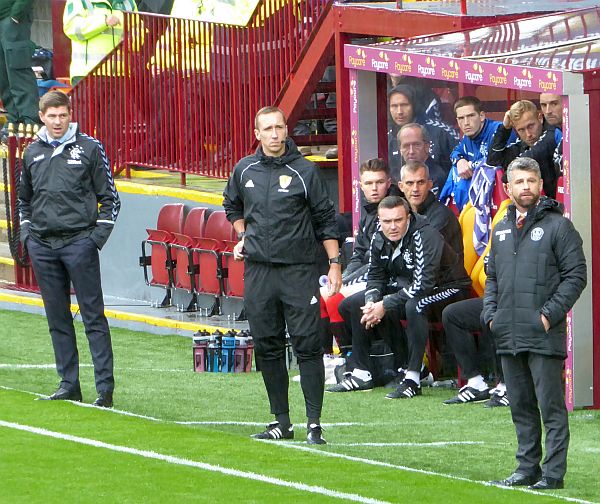 It took the visitors 20 minutes to get back into the contest.  Tavernier crossed and Laffery was presented with an unchallenged header.  2-2

With half time looming we conceded the third.  It came immediately after our corner in front of the South stand.  The clearance led to a break that ended with Barisic feeding Ejaria.  His shot was partially stopped by Carson but it trickled over the line to leave us one behind at the break.

The second period lacked little of the intensity that was on show for the first 45 minutes.  For a spell Rangers controlled the game, passing the ball around with confidence but our defence withstood their probing.

As the game moved to the final quarter we had Frear , Sammon and Bowman on the park to add to the threat of Main and there was a series of close calls at McGregor’s goal.

Most of the added three minutes had gone when we were awarded a corner.  Gerrard sent of Wallace to see off the final attack as the clock ticked beyond the allotted time.  Bigirimana delivered from the corner of the Cooper and O’Donnell stand and Hartley won the scramble to bundle the ball over the line from a yard.

The home crowd went wild and the away support headed for the exits.  Th final whistle came and we celebrated a hard won point.

All 14 in claret and amber gave their all and deserved the standing ovation for their efforts.  If we can start to replicate that level of commitment and performance it will not be long before we climb the table.