A poor showing by Motherwell lost 1-0 to Livingston.  But for the heroics of Mark Gillespie it could have been worse.

We played a part in this game for the first five minutes then disappeared.  Livingston controlled the game and had us deep in trouble for long stretches.  Some soul searching needs to be done in the depths of Fir Park.

There were three changes for the visitors.  Richard Tait, Jermaine Hylton and Chris Long returned in place of Liam Grimshaw, Ross MacIver and the departed James Scott.  Neither of the winter window loanees was listed in the squad. 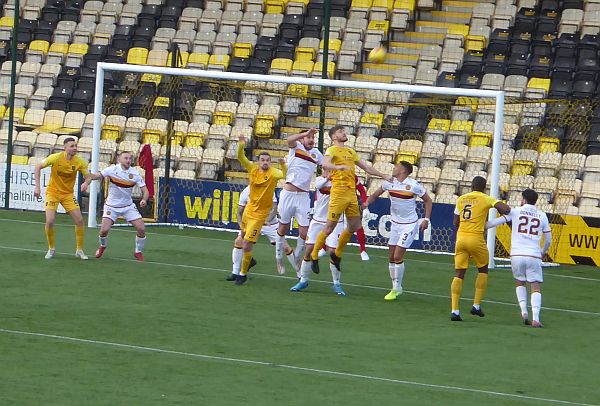 Motherwell started well with an attitude that was full of promise.  They were first to the ball and measured as they probed the home defence but it was Livingston that created the early chances.  Dykes picked up a scrap and charged forward to send a low drive to test the ‘keeper.  Gillespie had to be at full stretch to finger tip to safety from the ruck at his right hand post before Pittman came through with only Gillespie to beat.  Thankfully his shot was blocked.

That spell ended our short time in charge and for the rest of the half we were forced  into defensive mode.  Mark Gillespie was called into action too often and it was thanks to him that we reached the interval without loss.

The manager decided that a change was needed so Bevis Mugabi and Christy Manzinga came on for the second perion leaving Hylton and Ilic in the dressing room.  We switched three at the back and five in midfield.

The home crowd (not there were many among the 1,932 present) fired up as John Beaton took a firm line at some of the robust tactics on show.

There was a scare when Gillespie needed treatment following a collision with Bartley.  When he recovered we committed the third substitute, Mark O’Hara for Liam Polworth, and promptly conceded.

A throw from our right was floated into the box and we failed to clear.  The ball popped up at the far post giving Taylor-Sinclair an easy header from close range.  Few would argue that the home team did not deserve the lead.

Livingston kept the pressure on forcing us into last gasp defensive tackles while we wre rare visitors to the other end of the pitch.  The yellow shirts seemed to have the freedom of our box.

Our final urgent charge forward in the additional two minutes earned nothing.