Much of the credit for the triumph has to go to Marshall.We were under huge pressure for much of the second half in particular and his many saves kept us in the game.Without his impressive performance there would have been no prospect of a couple of late goals stealing the show. 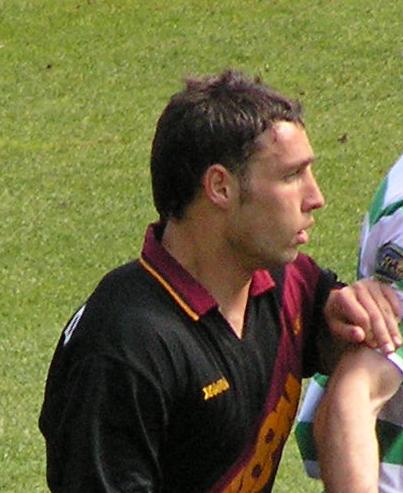 Hugh Dallas, in his final game, made it known in the first minute that he was in control as Foran entered his book for illegal works while defending a corner. McDonald, who was to be a thorn in the Celtic defence all day, caused a stir when he collected a Craigan clearance in at the halfway line.He eluded a couple of defenders and dashed up the left wing to the cheers of the packed East Stand.He elected to shoot over the top instead of squaring.

After half an hour a careless short pass from Foran on the Main Stand touchline conceded possession.The ball was swept into the box and Sutton got there in front of the defence.One down and the Celtic fans started their celebrations.In fairness, at that stage,few ‘Well fans could believe that the opposition would not be receiving the trophy at the end of the game.

We had a few set pieces in the first period but they were squandered and we posed little threat.After the breakwe almost produced an immediate equaliser when Craigan powered a header on target from close in.The ball smashed against Agathe’s face on the goal line and was cleared.

Celtic then had us on the ropes for a twenty minute spell.Bellamy was though with only the keeper to beat but Marsh stood his ground and got a touch.He then produced a few blocks, stops and clutches to deny the inevitable second goal.

As the game entered the last fifteen minutes it became clear that Celtic were suffering from a touch of nerves.We started to move into their half and the ball started to appear in the penalty area in front of the Cooper Stand.

Britton and Clarkson replaced Fitzpatrick and Hamilton.The home crowd started to urge the lads on for a last effort to sneak a draw and then something wonderful happened.

With two minutes remaining McDonald scored his first.An overhead kick from the edge of the box left Douglas with no chance.The marvellous effort gave rise to an increadilbe contrast within the 13000 crowd Half were on their feet cheering and the other half held their heads in their hands. 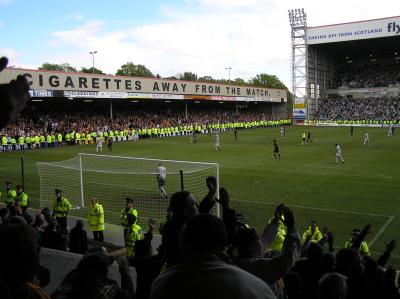 Better was to come on the ninetieth minute.Skippy produced a lob for his second and the roar of the home fans almost lifted the roof.

The South Stand was empty within a minute of the final whistle and the ground was reclaimed by Motherwell fans.The yellow jacketed stewards and police formed a secure cordon round the track and the team was able to take the thanks of the fans.A great season came to an end on an incredible high and the team can depart on a well deserved break.

Thanks for a smashing season lads!