Motherwell earned rare victory in Perth with first half goals from Tom Aldred and Danny Johnson.  A miserable winter afternoon was brightened by a fine performance from the men in claret and amber.

We lined up with two changes from last week’s eleven.  Campbell and Mbulu replaced Gorin and Rose as the game started in driving sleet that chilled the modest crowd. 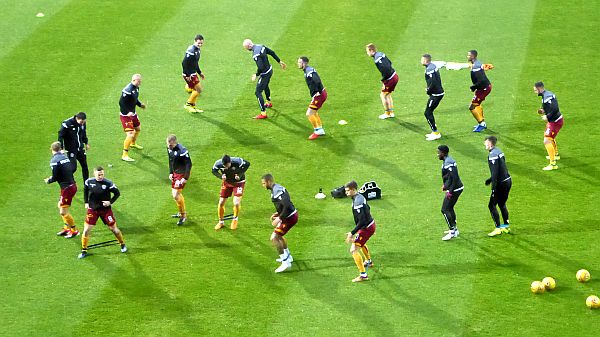 In under two minutes the Motherwell support were warmed by the sight of Tom Aldred celebrating his goal.  David Turnbull delivered a corner kick deep and the big defender was on hand to sweep the ball into the net from close range.

There was more to come.  In 16 minutes Liam Grimshaw put the ball into the area and it landed at the feet of David Turnbull.  He struggled to control it and scuffed a weak effort that fell kindly to Danny Johnson.  Our striker made no mistake and we had a two goal lead.

The home side were presented with a penalty when Dunne handled in the box.  Kennedy took the shot but Mark Gillespie made the save and pushed the ball wide.  That makes back to back penalty saves for Gillespie following his stop from Griffiths of Celtic.

We came close to number three when another Turnbull corner was headed by Aldred before McHugh directed it on to the line only to see a last ditch clearance.  Kerr fired a decent effort at our goal but Aldred deflected it to safety.

St Johnstone had the majority of the play in the run up to the break and we had to be alert in defence.  A frustrated Grimshaw was booked for a silly kick following careless loss of possession.

Johnson had a blast from 20 yards as we started the second period with attacking intent.  Turnbull had a chance for a volley inside the box but he elected to control first and was closed down but the ball squirmed to Tait for a blocked effort.

It was 15 minutes into the second half before the home side threatened.  Kennedy’s cross found Kerr deep but he blasted high over the big target.  Tommy Wright threw on Kane and Swanson with 25 minutes remaining in an attempt to change his side’s unimpressive showing.  Robinson responded by substituting Gorin forTurnbull.

St Johnstone pulled one back in the 83rd minute when a cross from a short corner was headed strongly by Kerr.  That led to some nervous minutes but we survived to record the first win in Perth since 2012.  Well deserved.