Motherwell failed to press the advantage of an extra man against Rangers and lay down to a 3-1 defeat at Fir Park.

There can be few instances when a team faces a ten man opposition for a full half of football yet fails to come close to a shot on target.  Worse, they managed to concede twice.  Motherwell’s second half display was shocking, an embarrassment. 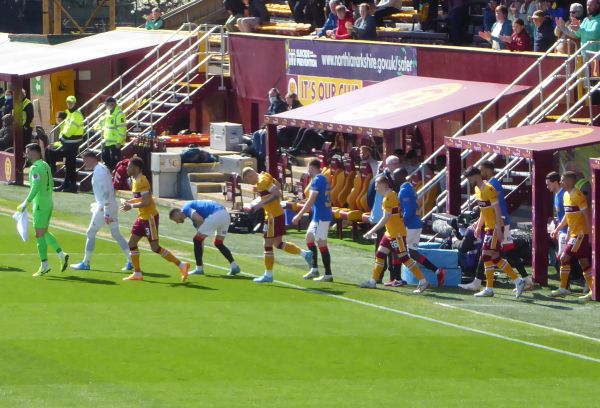 Two teams emerge from the tunnell - it's been a while

It looked good at the break.  Rangers had taken the lead in 13 minutes following an unfortunate error by Liam Kelly.  At full stretch he got a high touch to a Goldson header but the ball dropped into a ruck on the line and the goal was given.    Dean Cornelius skipped his way beyond a couple of challenges in front of the home dugout then fell in a heap as Ballogan’s dangerous high tackle landed.  Nick Walsh produced a straight red card and the game changed.

The visitors were unsettled and ten minutes before the break a tempting cross from Jake Carroll allowed Ross Tierney to level the game with a header.  Rangers were grateful for the interval.

Home fans’ expectations were high when the teams emerged but within two minutes a goal was lost. Fashion Sakala set off of a forty yard cross field run from wide on the right passing claret and amber jerseys on the way.  He found Scott Wright on the left and his shot beat Kelly.

Surely this was just a setback that would spur the eleven men to a fighting reply?  No, a meek acceptance of their fate seemed to settle on the Motherwell team as they hardly ventured to the Cooper end.

Bevis Mugabi got too close to Sakala and conceded a penalty.  Tavernier sent Kelly the wrong way and the score was 1-3 with half an hour remaining.

A triple ‘Well substitution made no difference.  O’Hara produced an off-target header in added time but at no time did Motherwell look like threatening McGregor’s goal.

Kevin Van Veen was suspended and his presence was sorely missed.  The much criticised long ball tactic to the big striker was unavailable today but its loss only emphasised the weakness in Motherwell’s passing game.  Tierney and Cornelius earned pass marks but otherwise is was a shambolic showing and an opportunity missed.