Motherwell and St Mirren had to settle for a point apiece when a four goal second half produced a 2-2 draw.

Both sides can rightly claim that they should have won the match that came to life in a breathless second half.  Tony Watt’s four minute double soon after the break should have ended the contest but Eamonn Brophy replied in kind with fifteen minutes remaining and Motherwell had to hang on at the end for a point. 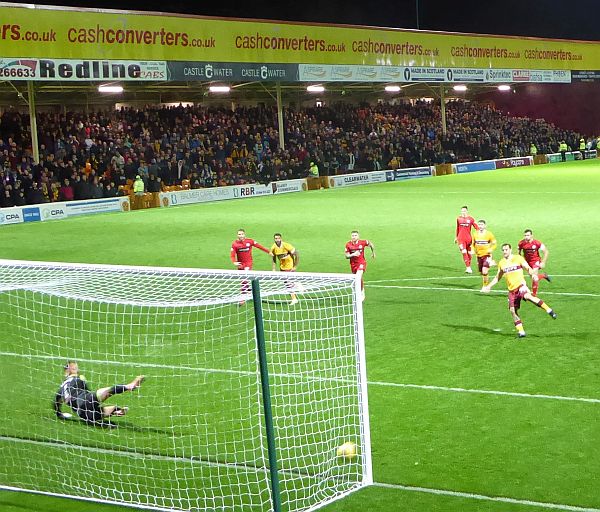 Sondre Solholm and Connor Shields were added to the starting eleven as Bevis Mugabi and Kevin Van Veen dropped to the bench.  Motherwell got the game underway after a respects were paid to the late Walter Smith.

The first period did not persuade any of the crowd that their expedition into the October monsoon was justified.  It was a turgid affair with Motherwell going long and St Mirren getting bogged down in midfield.  The visitors looked more likely to break the deadlock but neither ‘keeper was troubled.

The fireworks started a couple of minutes after the break.  Shields had chased wide into the box but his attempted cross was blocked.  Sean Goss was on hand and he delivered the ball to the head of Tony Watt at the far post.  The ball was directed down and the high bounce sent it soaring into the net.  Somehow Motherwell had snatched the lead.

Better was to come three minutes later when Watt was caught by Jak Alnwick as they scrambled for a loose ball.  Watt placed the ball to the goalie’s right post and enjoyed the celebration.

Such is the unpredictability of the Motherwell defence that none in the home stands dared hope that the scoring would end and their fears came to pass in 74 minutes.

Brophy charged on to a ball wide on the right and Liam Kelly found himself well out of position as he tried to cover the threat.  The striker did well from his acute angle to find the empty net.

In a bizarre echo of Watt’s earlier feat Brophy earned a penalty when Bobby Madden judged the collision with Solholm in the visitors’ favour.  Kelly produced a terrific save but the referee sparked a furious reaction when he insisted on a retake.  Brophy scored at the second attempt.

The game had been transformed and though both sides tried to find a winner it was Motherwell that had to do most of the defending.  Kelly produced a couple of world class saves as the fourth official raised his board giving five additional minutes but the end came and the match ended all square.

Motherwell remain one place of their opponents and finish the first cycle of fixtures in sixth place.