Motherwell and Aberdeen play out a draw

It seems to be Motherwell's fate to concede a late, late goal to Aberdeen and it was no great surprise to see Anderson bundle the ball over the line a few minutes into added time to level the game.  Any neutral would agree that the draw was fair but it's always cruel to see three points reduced to one at the death. 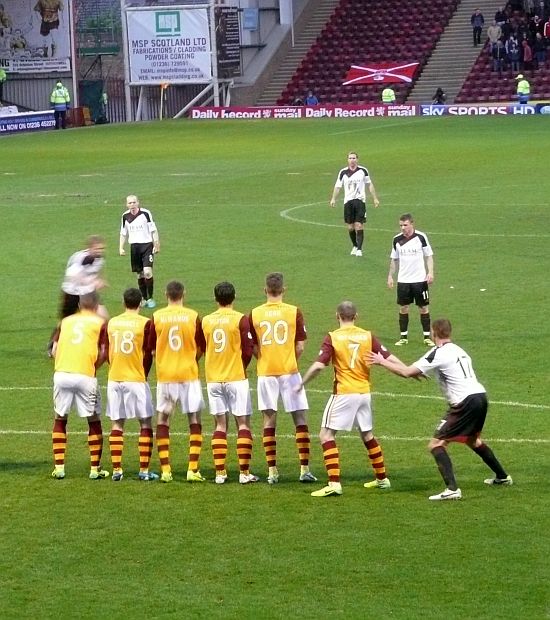 A midweek injury to Vigurs created room for Kerr to take station at right back as Hammell moved back to the left.  The visitors kicked off and attacked the Cooper end and for much of the half that was where the action took place.

Hutchinson was in the wars early on and after a warning from the referee he entered the book in 7 minutes when Jack was injured as the ball was cleared.  he was replaced by Pawlett as we prepared to defend the free kick that Robson was to fire high.

Our best chance of the half came when Francis-Angol fired in a cross for McFadden to flick at the near post.  Langfield did well to beat it away.  Robson robbed Carswell in midfield and gave us a fright when his effort struck the post.

Sutton was well challenged before he could pull the trigger and at the other end hayes had a strike that Nielsen palmed to safety.  Both teams were fast to close down their opponent and  there was action at both ends though Aberdeen had the better possession.

Motherwell started the second period in top gear and McManus gave us the opener when he headed Ainsworth's corner into the net from 8 yards.  We maintained the pressure for a spell but that ended when Kerr left the field on a stretcher after 55 minutes.  Lawson replaced him and Carswell was moved to right back. Hayes proceeded to run riot on that wing as Aberdeen chased the equaliser.

It came when Nielsen failed to deal with McGinn's long range shot and Rooney was presented with an easy tap in.    Our response was to swap McFadden for Anier and the benefit was instant.  Anier's fine work on the right touchline and a one-two with Lasley ended with a teasing low drive across goal where Sutton and Francis-Angol slid in for the finish.  Sutton claimed it and we were 2-1 up with 22 minutes remaining.

After that it we dug in to keep Aberdeen at bay.  Nelsen rose to take a couple of high crosses but there were several moments of indecision that foretold of what was to come. There were several scares and goal line clearances before the fourth official announced 5 added minutes.  The fourth goal of the game arrived when a cross from the East Stand side resulted in a scramble.  Reports suggest that Anderson was aided by a hand and the ball crossed the line to spark great celebrations in the South Stand.

The draw would probably have satisfied both managers before kick off and we remain one point behind Aberdeen with a game in hand.  We have a few weeks to repair the knocks and bumps before continuing the chase for second spot.