Ricki Lamie sent Motherwell into the top six with an added time header to rob Livingston after a 2-2 draw.

A stunned home crowd were left to wonder how their team failed to win a match they had dominated for almost the entire 90 minutes.  They were two up and cruising into the top half of the table and results elsewhere had conspired against Motherwell.  A Slattery rocket and a header two minutes after regulation time levelled the game and sparked repeated choruses of Twist and Shout from the jubilant ‘Well fans. 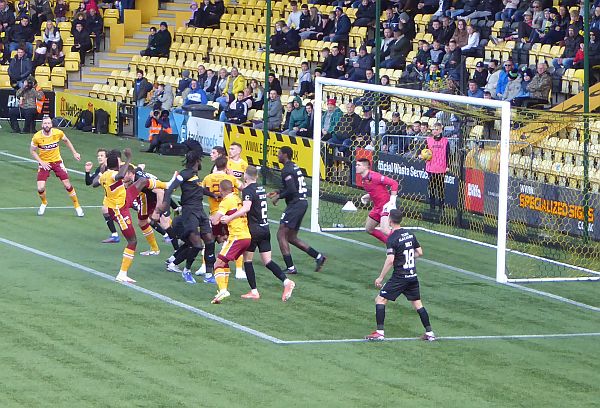 Motherwell kicked off with Jake Carroll in the left back berth, Stephen O’Donnell had occupied that place a week ago but was reported to be injured. The familiar 4-3-3 shape was backed by a vocal travelling support.

The home side took the initiative and for the opening fifteen minutes Motherwell were pushed back and had all hands defending their box.  Joe Efford caused a moment’s confusion at the other end when Stryjek attempted a clearance against his own man.

Livingston got the goal their pressure deserved after 26 minutes.  A pass to the edge of the penalty area and a slip by Carroll released Odin Bailey and he slotted the ball beyond Kelly and into the net.   Motherwell had hardly had by that stage been outthought and outfought by a team that were more determined to win the game.

There was little improvement from Graham Alexander’s men by the break and a difficult team talk lay ahead.  Mark O’Hara replaced Dean Corneius when the game resumed.

Motherwell started a bit brighter than in the first half and were unlucky not to sneak the ball over the line after a cross from Shields gave Efford and Van Veen chances from close range but the ‘keeper smothered at their feet.

Alan Forrest calmly placed the ball to Kelly’s right from 18 yards to double the home lead as they threatened to run away with the game.

Ross Tierney and Kaiyne Woolery replaced Joe Efford and Jake Carroll as the game entered the last quarter.   In 72 minutes Callum Slattery ran on to the ball and delivered a blistering low drive beyond Stryjek from 30 yards to offer hope of an unlikely revival.  The packed away section raised the roof as they encouraged the team forward.

All seemed lost.  Livingston contunied to look like the team likely to score again but a cruel twist was to come.

Two minutes into the four added Motherwell won a corner.  It was delivered from the away corner Ricki Lamie rose in the ruck to head the ball home.

That Motherwell have managed to scrape into the top half of the table having won only once since Boxing Day speaks volumes for the quality of the league.