Motherwell back to winning ways at McDiarmid

Motherwell earned three points in Perth thanks to Devante Cole’s first half goal.  The margin should have been bigger but the win was secured.

Richard Tait returned to action as Jake Carroll began his two match suspension but otherwise it was a familiar Motherwell side that faced the blue shirts as Ali McCann kicked off. 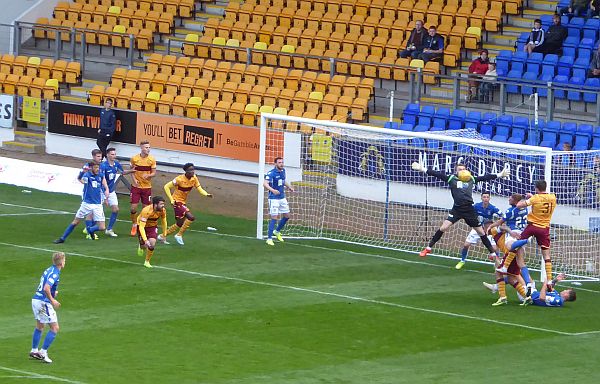 Gallagher sets up the winner

The early stages offered little and it was not until ten minutes that there was any action in either penalty area.  St Johnstone had earned a corner then we spurned a glorious chance five minutes later.

James Scott teased his marker at the angle of the box before sprinting to the dead ball line.  His squared ball across the face of goal found Devante Cole within two yards of the far post but somehow the striker managed to put his effort high of the bar.

Mark Gillespie was tested with a well worked free kick that had our man at full stretch to palm away the low drive.

We were to miss another chance when Liam Polworth placed a free kick on Declan Gallagher’s head but from the corner of the six yard box he missed the target but we were to get another chance before the break.

Gallagher rose above his markers to head Liam Polworth’s deep corner down.  Cole made no mistake with the simple conversion from close range.  It was his first goal for the club (should have been his second!)

Jermaine Hylton started the second half as Sherwin Seedorf failed to re-appear.

The Saints had an early chance to level the game when Richard Tait bumped Murray Davidson.  Referee Gavin Duncan awarded the spot kick.  Scott Tanser stepped up but so did Gillespie and the ‘keeper made the save.  The travelling fans sang his tribute.

With 25 minutes remaining Christian Ilic was introduced and Scott was withdrawn.  The intention to hold on to what we had was clear.

The home team committed all three substitutes as their attacks grew in urgency and they should have equalised late on as Murray Davidson sent a close range header wide.  We survived the three added minutes despite losing Liam Donnelly to a red card to take3 all three points back down the A9.