Motherwell will enjoy a European Tour after beating Hearts 2-1 to guarantee at least a fifth place in the league.

Goals from Joe Efford and Ricki Lamie had beach balls bouncing among the biggest home support at Fir Park this season.  Josh Ginnelly’s first half equaliser could not stop Motherwell’s progress. 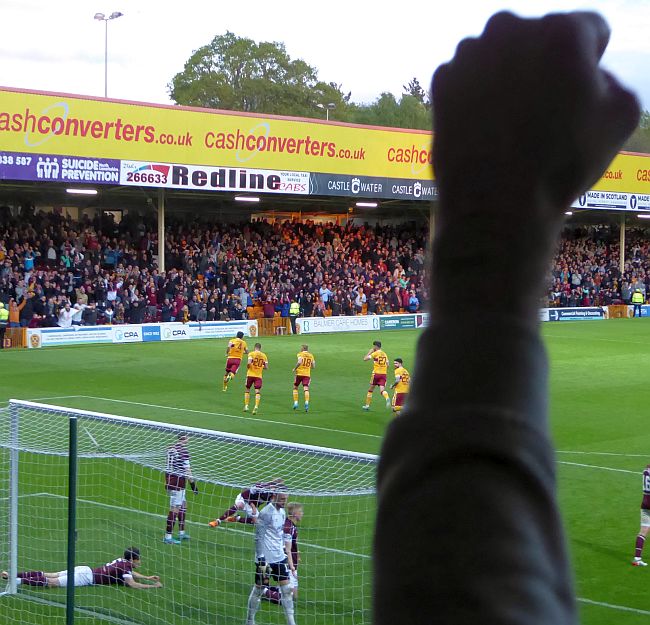 Ricki Lamie wheels away in celebration

The stage of qualification in the European Conference will depend on the results on the last day of the season.  Motherwell, in fourth place at the moment, have a one point advantage over Dundee United.

There were two changes to the Motherwell side that won in Dingwall at the weekend.  Mark O’Hara and Ross Tierney made way for Dean Cornelius and Callum Slattery.

The packed south end of the Hunter Stand exploded after two minutes when they were presented with the dream start.  Connor Shields tested Ross Stewart with a powerful shot from the left of the box and the stop presented Joe Efford with a simple finish. 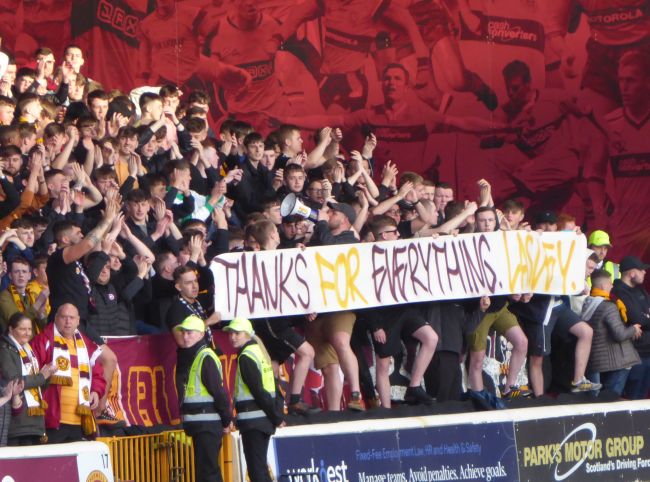 The visitors recovered and play started to run n their favour although the ceaseless harrying from Cornelius made it difficult.  A careless defensive header from Juhani Ojala gifted possession to Ginnelly and the number 30 proceeded to run unchallenged into Kelly’s area where an accurate finish levelled the game after ten minutes.

The crowd marked Keith Lasley’s last Fir Park involvement with a round of applause as the stadium clock displayed the 14 that he carried on a claret and amber shirt for so many years.

Hearts were the better side but the appearance after the break of Kevin Van Veen was decisive. The uplift in Motherwell’s performance was immediate and another early goal should have arrived when Shields cross to Efford resulted in an off-target header at the far post.

Van Veen’s handy footwork earned a corner and the winner followed.  The delivery into the ruck was not cleared and it offered Lamie a sight of goal form the centre of the box.  The ball found the net and the game was won.

Graham Alexander used all five substitutions as he shut up shop in defence of the lead.  Seven minutes were added and survived.

The players were able to enjoy a well earned circuit of the pitch to thank the fans.

Work remains to be done if fourth place is to be secured but despite an uninspiring run in the second half of the season the prize was won.