Motherwell beat Hearts to win three in a row

The Mighty ‘Well completed back to back wins against the Edinburgh sides with a convincing 3-2 triumph at Tynecastle.  Declan Gallagher, Sherwin Seedorf and Jermaine Hylton scored fine goals to send the Motherwell fans home happy.

After a dull opening 20 minutes Gallagher headed us into the lead and we never looked back.  We should have increased the margin before the break but patience brought its reward in the second period.  Hearts scored a couple to make the final minutes tense but to a raucous rendition of Twist and Shout we saw the game out. 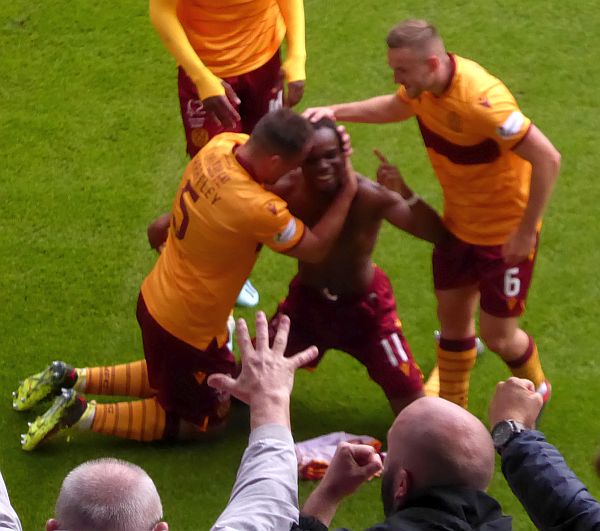 Devante Cole got the nod ahead of Chris Long but with confidence high Liam Polworth kicked off proceedings.  Goalkeepers had an easy job for the first quarter with little action in either area.  The home side targeted Uche Ikpeazu with long balls as Gallagher and Peter Hartley kept the big striker under control.

The game was set alight following a 25 yard shot from Gallagher that Colin Doyle tipped over the bar.  The defender header the resultant corner into the net.  It was to be the first of a five goal thriller.

James Scott cut across the pitch to release Sherwin Seedorf on the left.  The winger set up Polworth but the shot was high.  Sean Clare produced a weak effort easily held by Mark Gillespie before we returned to attack.

Cole almost found the second but an outstretched foot foiled his attempt.  Liam Donnelly blasted against the bar from outside the box.

Seedorf had the home fans in the air five minutes into the second half.  He pounced on a loose ball at the halfway line and despite the close attention of three defenders he reached the 18 yard line and unleashed a rocket that clipped the underside of the bar.  Off came his shirt as he celebrated in front of the travelling support.

We conceded on the hour when Ikpeazu won a scramble inside our six yard box but our two goal lead was soon restored.  Seedorf took a heavy challenge and was replaced by Jermaine Hylton.  The substitute found space on the inside left channel and with Doyle in no man’s land a delicate curved ball found the empty net.

The game should have been done and dusted when Hearts were reduced to ten men when, with all three substitutes committed, Conor Washington had to leave the field with a pulled hamstring.  Nevertheless, in the dying minutes Ryotaro Meshino struck home from the edge of our penalty area.

The game ended after a tense four added minutes.  The close scoreline hardly reflected Motherwell’s superiority.  Still, three points will find their way to Fir Park as Motherwell make it three wins in a row.