The final score flattered the visitors and we could have been four up by the break.  The result was all the more impressive as the manager had to dig deep into the U20 ranks to fill the injury ridden first squad.  Jack Leitch earned a first starting place and he was joined by Euan Murray before the break.  Chris Cadden joined the fray ten minutes from the end. 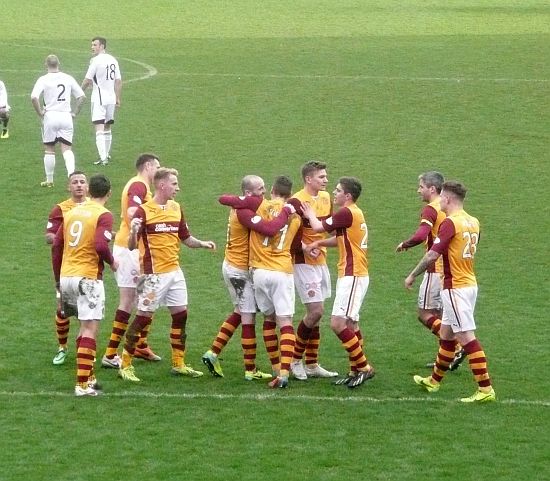 Urged on by a vocal home crowd, we took the game to MacDonald’s South Stand goal and never looked back.  Ainsworth and McFadden were soon teasing the white shirted defence and the ‘keeper had to be sharp to delay the opener that came after 18 minutes.  The  first of three assists from McFadden set up Vigurs with a neat one-two for a close finish.

Hollis, restored to duty at the cost of Nielsen, coped well with the few threats that came his way.  Hearts hit the woodwork twice and they might have equalised after half an hour when Stevenson’s free kick brushed the wrong side of the post.  Francis-Angol pulled up with what looked like a hamstring pull ten minutes before the break to add to our injury list and Murray replaced him at left back.  The change made no difference to the balance of the game and we extended the lead when Ainsworth collected Faddy’s lob from the dead ball line to provide Ainsworth with the ball.  He took a touchthe a fired a fierce shot into the net from 17 yards.

Hearts switched formation at the restart with Carrick replacing McKay but we continued to dominate although the substitute cracked the bar with a fine effort.  Our chances continued with McFadden, Sutton, Leitch and Ainsworth all coming close.

Sutton got the third following a blocked effort from McFadden at the edge of the box.  The ball fell to our big striker and he managed to guide the ball beyond the ‘keeper and it rolled into the net.  Hearts struck back when Paterson headed McHattie’s corner kick high into our goal.

We restored our three goal advantage within five minutes.  Sutton earned a free kick wide on the East Stand touchline and Vigurs delivered.  His curling cross was glanced into the net by McFadden  - a fitting culmination for the man of the match.

The win maintains our league position but gives a huge boost to the injury stretched squad.  The treatment room will have another busy week before we travel to Easter Road next Saturday.