Motherwell earned a first league win of the season with a 2-1 win in Livingston.  Tony Watt and Liam Grimshaw were on the score sheet.

An excellent second half recovery gave Motherwell a welcome three points after conceding late in the first period.  It was a deserved win and one that came from a much changed team.

Graham Alexander shuffled his pack as the rain fell on the Almondvale surface.  Bevis Mugabi, Mark O’Hara, Justin Amaluzor and Tony Watt made the line-up as Barry Maguire, Liam Donnelly, Steven Lawless and Connor Shields made way.  Mid-August or not, the floodlights were on as Motherwell got the match underway. 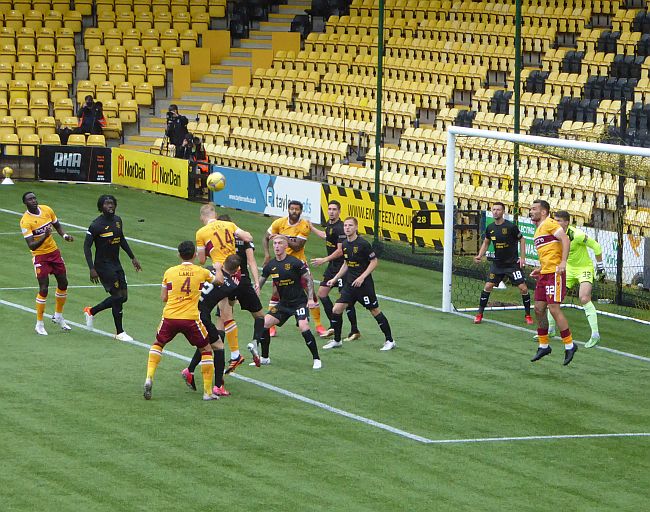 With Lamie and Ojala in the centre Mugabi found himself at right back as Grimshaw moved up to right midfield.

The visitors started well with three corners in the first ten minutes.  The home defence survived a few scares notably when Ricki Lamie delivered a perfect long ball to release Callum Slattery inside the box but the shot was wide of the target.

The game took on a more balanced feel though Motherwell looked the more likely to score.  It did not turn out that way.  Bruce Anderson carried the ball along the eighteen yard line before passing to Alan Forrest.  He saw a gap and fired low across Liam Kelly to score as the ball sneaked in at the ‘keeper’s left hand post.

Motherwell equalised three minutes into the second half.  With the Well Bois drum now back in action and urging the team forward a corner was won on the right. The usual two man combination delivered the ball to the far post where Tony Watt headed home from close range.

The lead might have come following a 30 yard midfield run by Grimshaw.  He found Kaiyne Woolery charging in from the left but he fired straight at Stryjek.

There was a long interruption as substitute Sean Kelly received treatment after a collision with his ‘keeper at edge of the box.  Watt had lofted the ball high and as Amaluzor and the two defenders clashed Kelly came off worst.

With ten minutes remaining Watt’s neat footwork around the angle of the box earned him a shot at goal.  The ‘keeper could not hold it and Grimshaw was on hand to blast home from a couple of yards, his first goal for the club.

Grimshaw then produced a vital block as Livingston shot from the penalty spot and Kelly follwed that with a fine save from Delvin.

Nathan McGinley and Darragh O’Connor came on to stiffen resistance in the dying minutes and to a rousing chorus of Twist and Shout the referee ended the game.

A first league win and an excellent performance from Tony Watt and Liam Grimshaw was enough to send the travelling fans homeward in good spirit.