The win leaves us a point short of a guaranteed third place but the beach balls can be employed in midweek if results go our way.  All three goals came in the first half before an indifferent second period that saw us defending deep for long spells. 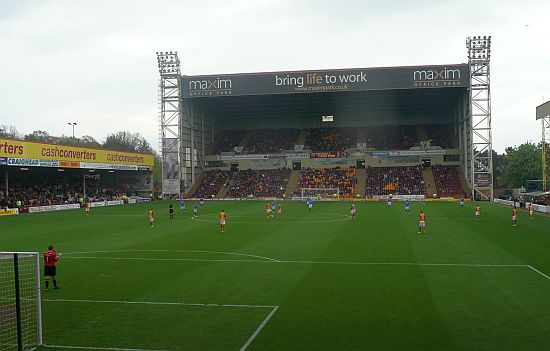 There were four changes from the team that lost so comprehensively at Tannadice.  Nielsen was replaced by Hollis in goal and he was accompanied by Kerr, Anier and Leitch.  Francis-Angol, Ainsworth and McFadden joined up to provide at attacking set up with pace on either wing aided by the guile of Faddy in support of Sutton up front.

Motherwell took charge early on and entertained the South Stand crowd of invited youngsters with a series of goal threats.  Lasley had an early blast, Sutton was on target and Francis-Angol looked lively on the left wing.  May reminded the home crowd of his pace when he was sprung down the right flank but his shot from a narrow angle caused Hollis no problem.

We took the lead after 20 minutes when the ball was fed to Ainsworth at the right side of the penalty box.  His floated inswinging cross/chip to the far post cleared the ‘keeper and snuggled into the net.  Our lead was short lived and we lost a simple goal from a corner.  Wotherspoon delivered from the East Stand side and the unchallenged Mackay headed home from 8 yards.  It was a poor goal to concede.

The goal that was to win the game arrived in minute 35.  Vigurs took a free kick, McManus headed goalward and Mannus was beaten.  The ball seemed destined to reach the net but Anderson’s fist flew high in a desperate attempt to keep it out.  The ball ended up over the line but confusion ensued.  The referee seemed to award the goal but he returned to the six yard box, surrounded by players from both sides, before booking the defender and confirming the goal.  The drama of a penalty and a red card was avoided.

The second half was a disappointment.  St Johnstone pressed, threw on more attackers and for much of the time the ball was in our box.  May dented his reputation with a dive inside the box but referee Clancy was on hand to issue the caution.

The win sets up a cracker on Wednesday and the prospect of a winner-takes-second-spot game at Pittodrie next remains.