Motherwell were thumped 4-0 by Celtic at Fir Park.  Only an excellent goalkeeping performance by Liam Kelly prevented an embarrassment.

The gulf in class between the teams made this a one-sided affair.  Celtic were three up at the break and Motherwell were fortunate to lose just the one goal in the second half. 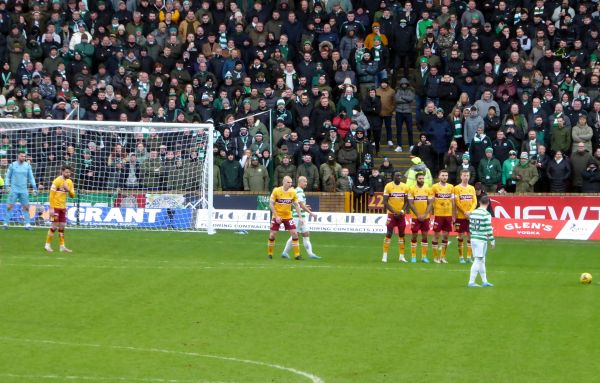 Dean Cornelius joined the starting eleven as Liam Shaw dropped out.  The young midfielder can be satisfied with his work as he grows into the ‘Well squad.

We survived a scare in the first minute but Kelly produced the first of many of the afternoon’s goal line saves with his feet to clear Abada’s shot.  Nothing was lost for the first half hour and there was even a ten minute spell when Motherwell were camped in Celtic’s last third but a couple of goals in as many minutes from Abada and Rogic confirmed that the points were headed to Glasgow.

It looked like there would be a two goal deficit at the break but the last action of the half saw Abada with a cut back and a second goal from Rogic.

There were ten substitutions over the course of the second period and Motherwell elected for three at the resumption. Ross Tierney, Joe Efford and Kaiyne Woolery joined the fray and for a few minutes they provided some entertainment in front of the Cooper stand.  Efford even forced Joe Hart into a save.

The fourth goal came after 70 minutes after a Meada shot at the edge of the box spun high off Bevis Mugabi’s block to find the net.

In the end Motherwell had to settle for a four goal loss and Kelly deservedly earned plaudits for keeping the score down.

Somehow Motherwell remain in fourth but there will have to be more of an attacking threat on show at Tannadice in midweek if that place is to be retained.