Motherwell celebrate safety with a win over Dundee

Motherwell came from behind with goals from Bowman and Kipré to earn a 2-1 win over Dundee.  With top flight survival assured Stephen Robinson can now concentrate of the Scottish Cup final.

It was a game peppered with memorable moments.  The four thousand fans inside Fir Park delivered a farewell round of applause to the ageing electronic scoreboard then gave a sympathetic clap to Dundee’s first half goal scorer Kusunga as he was carried off after a scare that delayed the second half.  But the crowd exploded when Kipré converted Cadden’s corner to deliver the winning goal. 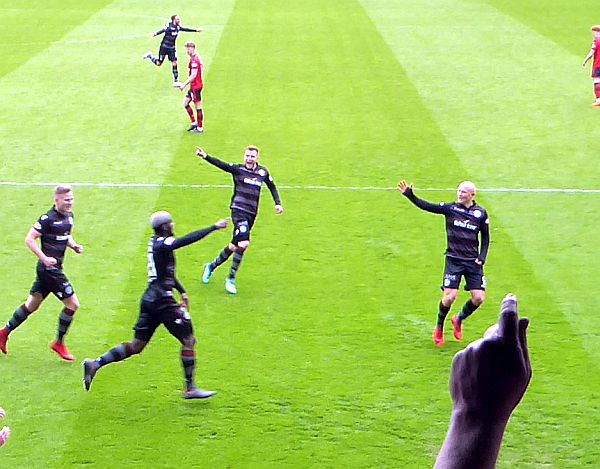 Both teams lined up in their away strips on an unseasonable chilly afternoon.  McHugh returned thanks to Rose’s injury and there was early action at either goal.  Wighton headed wide at the Cooper end while Bowman struck the post at the other.

Dundee were forced to make an early substitution when Moussa broke down after three minutes.  Leitch-Smith was his replacement.

Carson stood up well to Murray’s shot from close range but our ‘keeper was beaten before the half hour when Caulker headed the corner delivery into a ruck of players on the goal line.  Kusunga got the final touch as the ball crossed the line.

Our reply was not long delayed.  Cadden’s corner was headed into the mix by Dunne and Bowman got a head to the ball to help it into the net.  The quick equaliser spurred us n and Main let fly a thunderbolt that had Parish at his best.

Our scored sustained some damage and after a few minutes he was substituted by Scott.  The youngster showed enough in his fifty minutes play to suggest that we’ll see more of him before the season’s end.

After the delay to the restart due to Kusunga’s treatment we took control and dominated the second period.  Our style was the familiar willingness to fight in midfield to recover possession and deliver the ball smartly to the forwards.

Five minutes into the half Cadden sent in a deep corner and Kipré rose to head beyond Parish.  The cheers lasted long and loud for our ever present central midfielder and his name echoed round the ground as he celebrated his first goal.

We retained the upper hand until the final fifteen when we had to withstand wave after wave of Dundee attacks.  The defence fought well to protect Carson’s goal and we survived.

Three games remain in the league and we can protect our assets for the end of season climax at Hampden.