Motherwell crumble and lose to Hamilton

Motherwell finished the year with an awful performance that ended with a 2-1 loss to Hamilton.  The visitors came from behind and could easily have won by a bigger margin.

Nobody who witnessed the first twenty minutes would have believed the turnaround that was about to unfold.  Chris Long rattled Motherwell into the lead after five minutes and we piled on the pressure looking for the killer second but Hamilton gradually took control and eventually ran out comfortable winners. 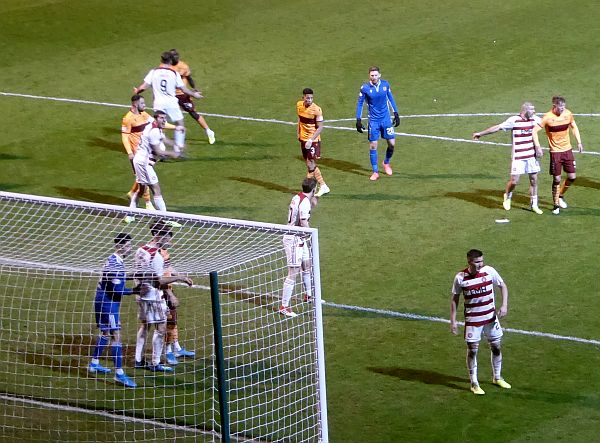 Gillespie up for a corner...desperate measures

Bevis Mugabi, Liam Grimshaw and Chris Long returned to the opening line up as Peter Hartley, Richard Tait and Sherwin Seedorf stood down.  Apart from a scrappy early effort from David Moyo all the early action took place in front of the modest Accies support in the South Stand.

The opener came after five minutes when Long cut in from wide on the left before shooting across Southwood’s goal.  The ball caught the far post and finished in the net.  Motherwell looked to build on the early success and when James Scott headed on for Long to run in on goal it seemed that a second was arriving.  The striker missed the target.

A warning was given when we conceded a free kick on the half hour but Mickel Miller wasted the opportunity.  Hamilton took heart and had the better of the fifteen minutes ahead of the break.

Stephen Robinson must have made it clear in his team talk that  an improvement was needed in the second period but it was Hamilton that took the game by their greater willingness to scrap for the ball.  Moyo unloaded a tasty long range effort that Gillespie tipped over the bar before a defensive tangle at the edge of the box allowed Miller a toe poke at the empty goal.  Carroll was on hand to clear up.

We were second best all over the pitch.  It seemed inevitable that we would concede.  Robinson was aware of the danger and made a double substitution.  The ineffective pair of Scott and Hylton were removed as Peter Hartley and Sherwin Seedorf joined the fray.  The switch did not work.

In 67 minutes Aaron McGowan’s deflected shot beat Gillespie to give the visitors the equaliser they deserved.  Surely that would shake Motherwell from their lethargy? No.

The remaining fifteen minutes had us punting aimless balls upfield in the hope of a miracle.  We were second best by a long way.

It was a disappointing end to the old year but we will return to action after the winter break still in third place.