Motherwell managed to overcome a spirited ten man Hamilton thanks to Mark O'Hara's goal. League safety is in sight.

Motherwell are beginning to make a habit of scrambling a winning result without playing well.  With the opposition a man short for an hour and a goal advantage by the break this should have been a cake walk.  Hamilton had other ideas and they will feel their efforts were worth a point. 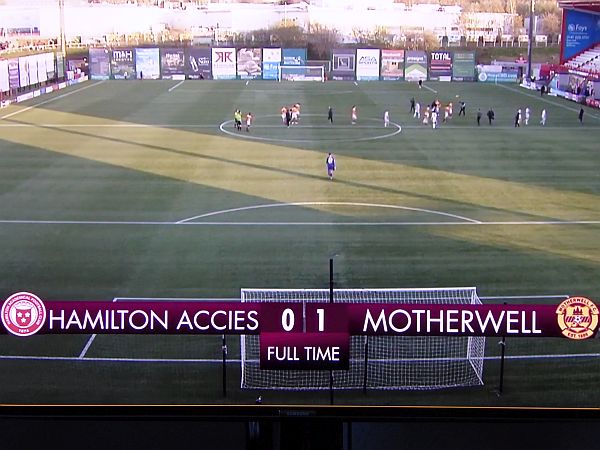 Graham Alexander elected to change to a 3-5-2 shape and to that end Tyler Magloire joined the starting eleven along with Mark O'Hara.  Barry Maguire and Steven Lawless dropped to the bench.

After an early scare when Hakeem Odofin got on the end of a free kick Motherwell settled and soon created a chance.  Ricki Lamie had a header on target following what has become a routine short corner.

Devante Cole tried his luck with an attempt from the angle of the penalty area and the 'keeper parried for a corner.  Hamilton were reduced to ten after a rash challenge from Ronan Hughes floored Robbie Crawford..

The winning goal soon followed.  With 37 minutes on the clock O'Hara scored from 18 yards following a turn and low drive to Gourlay's right corner.  Cole came close immediately before the break but his shot flew on the wrong side of the post.

Hamilton started the second period in full attack mode.  They earned a couple of free kicks and launched several balls into the danger area in front of Liam Kelly.  Motherwell were not able to press the numerical advantage and allowed their opponents to push forward.

Chris Long had been booked in the first half and Alexander made a protective substitution and brought Maguire into the fray.  Motherwell looked far from comfortable and they seemed unable to match the energetic force that kept sweeping into Kelly's half.

The final whistle came as a welcome relief.  The three points will be gratefully received at Fir Park and planning for the cup quarter final can begin.  A vastly improved performance will be needed if Hibs are to be given a game.