It took a while but goals from Justin Amaluzor and Barry Maguire eventually sent Motherwell into the Premier Sports Cup knockout with a 2-0 win over Annan Athletic.

The win was deserved but Annan provided stiff resistance that was broached shortly before half time.  Motherwell had most of the ball but the slow and ponderous build up play rarely led to a threat on the visitors’ goal.  The crowd may have let their frustrations show had there been a goalless first half. 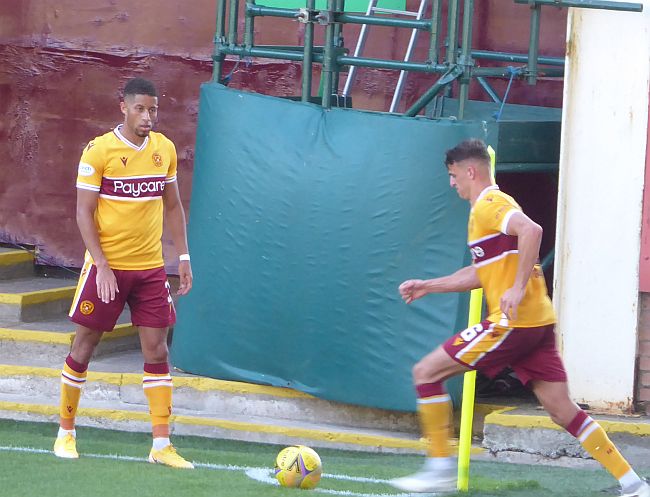 There were four changes to the eleven that started against Airdrie.  Most notable was the debut for Amaluzor as he joined Kevin Van Veen and Kaiyne Woolery in a three man attack.  At the other end Nathan McGinley, Ricki Lamie and Darragh O’Conner formed a defensive trio.

There were occasional tests for Fleming in the Annan goal as Van Veen managed a few shots and later Woolery and Barry Maguire came into the action.  The opener followed a spell of pressure that ended with KVV missing his shot.  The ball rolled on to Amaluzor at the angle of the six yard box and he drove low into the net to offer some relief to his team-mates.

After the break Van Veen tried his luck with a 25 yard free kick that stung the ‘keeper’s hand as he conceded a corner.  The second goal followed.  The double-manned set piece fell to the number nine and he set up Maguire for a low drive through a crowded penalty area and into the net.

Liam Kelly was a spectator for most of the hot afternoon but when Carroll conceded a penalty he was called up.  Moxon’s effort from the spot was blocked with a dive to the right and our goal remained intact.

Callum Slattery made his claret and amber introduction as Maguire made way and though the midfielder was on the pitch for only fifteen minutes he showed enough to suggest that he will be an asset to the squad.

Motherwell progress to the knockout stage as one of the unseeded teams in the last sixteen.  The draw will take place on Sunday evening.