Kilmarnock took the opportunities offered by off form Motherwell to run out 4-1 winners at Rugby Park.

After an even first forty five minutes Motherwell had a series of defensive lapses that were well taken by Kilmarnock.  Gone was the eagerness and sharpness that had the visitors hoping for a third consecutive win.  Team selection had served up the same starting eleven for the last four outings but there will surely be changes when the post-split fixtures begin in a fornight. 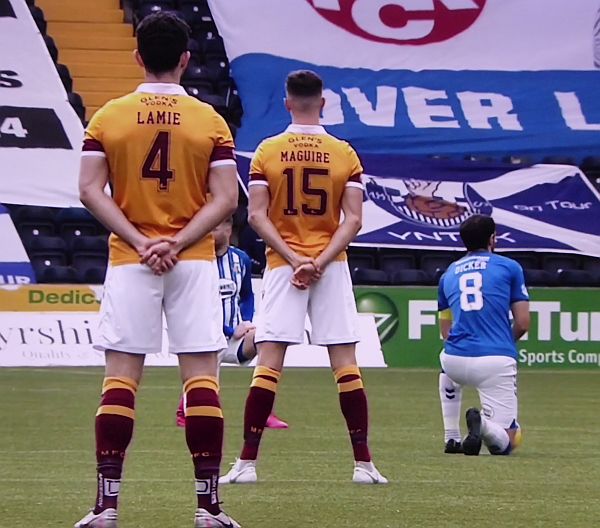 Motherwell stand up to racism

Motherwell announced just before kick-off that the players had decided not to participate in the 'taking the knee' ritual.  Instead of the empty gesture the plea was for those in power to take real and immediate action on racism.

Kilmarnock got the game underway and goals soon followed.  Barely a minute had passed when Kyle Lafferty declared his ambition with a 25 yard shot.  Liam Kelly had time to set himself for the save but the ball passed between 'keeper and post to give the home side an early bonus.

Motherwell shook off the disappointment in the 8th minute.  Alan Campbell delivered a deep cross and found the head of Jordan Roberts.  Colin Doyle did well to parry the close range effort but the ball fell to Barry Maguire who drove to the far corner (through the legs of Devante Cole).

There were a chances at either end before the break.  Notably a shot from Lafferty that brushed the post and a flying header from Tyler Magloire that Doyle was happy to push for a corner.

If the concession of a quick goal in the first half was bad then the loss of a further two within ten minutes of the restart was a disaster.

A deflected high spinning ball from Lafferty eluded Magloire's attempted header and fell kindly for Rory McKenzie.  He had a simple tap in to give Kilmarnock the lead.

Two minutes later the score was 3-1.  A quick free kick to the wing allowed Mitch Pinnock the chance of a cross.  It flew deep over three Motherwell defenders to the unmarked Chris Burke who blasted into the net.

There was worse to come.  Graham Alexander threw on attacking substitutes but the revival failed to materialise.  With men committed to attack there was always the risk at the back and that was exploited by Pinnock.  He chipped the ball over Magloire and finished through Kelly's legs.

The result provides a huge boost to Kilmarnock's survival hopes but Motherwell still have much to do in the five games remaining.