Motherwell drop to eighth after a poor show against Ross County

Motherwell ended the season in eighth place following a 2-1 loss to Ross County at Fir Park.

Despite the boost of a goal in six minutes Motherwell were unable to raise their performance to match the determination of their visitors.  Two second half goals without reply gave County safety.  The loss of a league place will annoy the club treasurer and it underlined the task facing manager Alexander in the close season.

Allan Campbell's ankle knock prevented him from playing a farewell game at Fir Park and with Steven Lawless on the bench Mark O'Hara and Robbie Crawford found a place in the starting eleven. 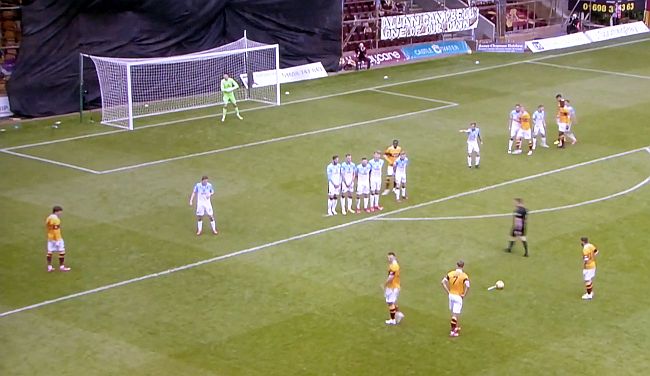 Allan Campbell - One of Our Own

The visitors kicked off on the pristine surface but within a minute Iain Vigurs had been booked for a foul on Chris Long but the resulting free kick from 22 yards crashed into the defensive wall.

Motherwell got an early goal with a wee bit of good fortune.  Jake Hastie gave Mark O'Hara the ball and a driven low cross from the right deflected on to Sam Foley's midriff and in to the net.  Foley (and the rest of the 'Well team) showed delight at the midfielder's first goal for the club.

County had the best of the rest of the half but the spurned several chances.  Keith Watson missed a glorious opportunity when his powerful shot from the penalty spot flew off the bar.

John Hughes had to relay his half-time thoughts from the stand due to his touchline ban but the message bore fruit minutes into the second period.  Vigurs threw off the attentions of a clutch of defenders and unleashed a fine left-footed curler beyond Liam Kelly.

Motherwell seemed unable to respond and the manager made changes.  Lawless and Tony Watt replaced Hastie and Crawford but the momentum swung further to the visitors when Jordan White released Michael Gardyne through the inside left position.  His shot was good and we fell behind.

The uninspired home team struggled to make an impact and County controlled the game.  Graham Alexander's antics on the track echoed the frustrations of the 'Well supporters who suffered the intermittent video stream.

A big rebuilding job needs to be done in the next few weeks.