Motherwell were held to a draw by Rangers following the loss of a second half goal levelling Devante Cole’s opener.

It was a spirited performance from the claret and amber men who looked well motivated and organised by Graham Alexander in his second game in charge.  The manager was delighted with the effort shown by his team as they moved off the bottom of the table. 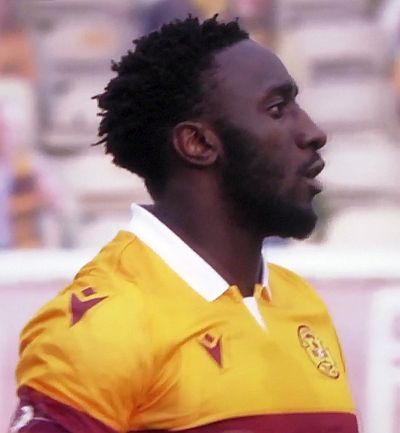 Motherwell kicked off facing the South Stand end and managed to score after twenty minutes. It was a very well worked goal.  The move started with Devante Cole in the centre circle.  Contributions from Jake Carroll and Liam  Polworth set up Tony Watt on the left side of the penalty area.  His superb delivery, low across the six yard box, gave Cole the simplest of finishes from close range.

Alfredo Morelos had the best chance for the blues but his header passed on the right side of the post from a Motherwell perspective.  Liam Kelly had little to do despite the visitors having the majority of the ball and showering his box with crosses.

Kelly had to wait until the second half to make a save as the visitors took total control of the game after the break.  They camped in on Motherwell’s last third but were rebuffed time after time.

Gone was Motherwell’s calm forward going play of the first period as the game turned into attack v defence.

The equaliser came when Cedric Itten rose unattended at the rear post to beat Kelly.  That was his fourth goal against Motherwell this season.

Motherwell earned a corner kick after 77 minutes following a rare venture to the Cooper end.  Alan McGregor had nothing to keep out the January chill.

Alexander made full use of his squad and employed four substitutes to freshen up his tiring side. Among them was Ross McIver, newly back from his loan spell with Morton.

There was late scare in the final minute of added time when Jermain Defoe fired on target but Kelly held.

Bevis Mugabi and Devante Cole were picked out by the sponsors for their contributions and although the recognition was fully merited there were nine others who can be proud of their part in a fine day.

The point is probably worth more in psychological terms to Motherwell that its effect on the league table and there will be growing feeling of confidence building in anticipation of the upcoming trips to Aberdeen and Dingwall.