It was a hugely entertaining early afternoon and when we went two ahead shortly before half time the possibility of an upset loomed large.  Celtic piled on the pressure and scored three before an injury time equaliser salvaged a point.  Given the pre-match concerns about our ‘weakened’ starting eleven and the fact that we hadn't scored against them in three earlier meetings, this was a very welcome point.  Fir Park for thrills! 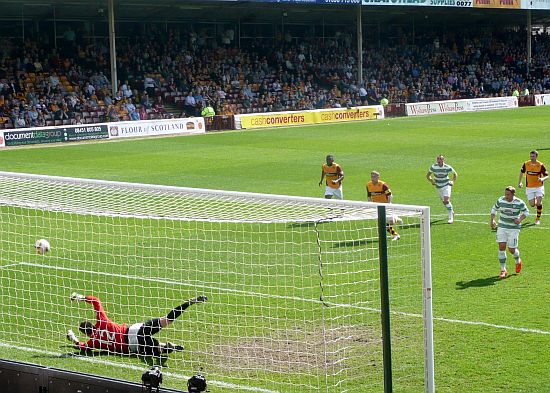 There were two changes from the team that lost in Paisley.  Lasley served his one match suspension and Ainsworth was benched.  Hutchinson returned together with Francis-Angol.  There was a surprise in store – we formed up with Hammell, McManus and Hutchinson at the back and five in midfield.  The tactic worked well.

The dream start soon arrived.  Three minutes had barely elapsed when McManus delivered a thirty yard ball in the direction of Sutton shrot of the left hand edge of the box.  Ambrose put up little opposition and our man escaped and fired low on target.  The ball passed under Forster and the first of six goals was recorded on the scoreboard.

Celtic pushed up but they found a strong defence waiting.  Anier got free on the break and raced into the box from the right wing but his shot was blocked.  The visitors had a golden chance to equalise when Vigurs gave Stokes a chance to fall in the box.  Commons took the penalty by Nielsen produced a fabulous save low and wide to his left.

As the break loomed we scored a second.  Anier was firs to react to a ball in the box and the ball fell to Francis-Angol who has switched to the right.  He poked the ball into the net from close range. We barely had time to consider the wonderful position before Stokes found a lifeline when his curled chip (probably intended for Samaras) sneaked in at Nielsen’s postage stamp corner.

Celtic were on the park five minutes ahead of the re-start with the half time talk still echoing in their ears.  We came close to a 3-1 lead when Sutton’s on target header from Vigurs’ corner flew to the corner but Kayal effected a clearance on the line.  The game was level two minutes later when we failed to deal with a long throw into the box.  Samaras finished from close in.  Most of the home support now feared the worst.  Suddenly several of our players looked heavy legged as the first half exertions began to tell.  For long spells we had to press the opposition and the outcome seemed inevitable.

Griffiths made the score 2-3 when he pounced with only four minutes left.  It looked like a cruel ending given the effort we had expended.    Jack Leitch was awarded our man of the match award – a deserved tribute to the youngster’s contribution.  In truth there were many contenders.

Ainsworth and Moore were thrown on to salvage a point.  Three additional minutes were signalled and we chased the game.  Ainsworth was released and he sprinted to the line.  He delivered a perfect ball across the face of goal and the Cooper Stand was on its feet as Sutton appeared to side foot the ball into the net from a yard.

It was a magnificent effort and it delivered a vital point.  Now we have a massive six pointer to anticipate at Tannadice.