Motherwell earn the plaudits in a 0-0 against Celtic

Motherwell were held to a goalless draw by Celtic despite losing Cedric Kipré to a controversial red card last in the first half.  The decision flipped the flow of the game and an impressive second period defensive performance got its reward with a point.

Craig Thomson has become a Motherwell bogey man who seems to donate his quota of Premiership red cards to players in claret and amber.  Kipré and Brown got entangled and exchanged handbags on the ground.  The referee saw our man raise a foot to the Celtic captain and whipped the red card out in a flash.  TV pictures were to show that any contact was minimal. 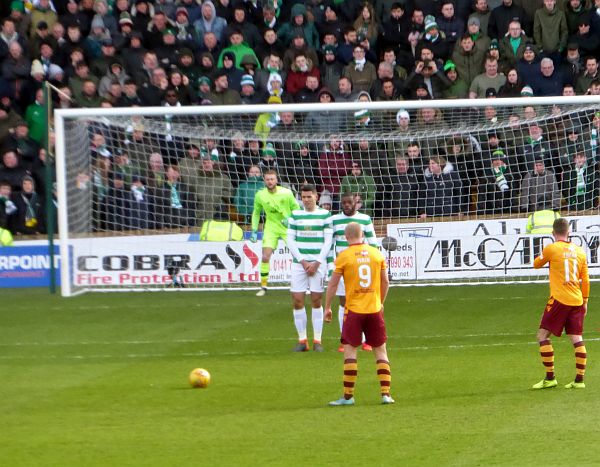 Main tests Bain with this effort

Frear and Bowman were given starting places as Tanner and Rose are on the injury list.  Cadden got the game underway and after initial exchanges we had the better of the first 45 minutes.  Carson had no save to make until Forrest tested him after half an hour while Bain was kept busy as he fielded a series of goal bound attempts.

Cadden started the assault on the Celtic goal with a long range effort, Main forced a decent save when he got a head to Frear’s cross, Bowman fired on target and Main blasted a 25 yard free kick to Bain’s right.

All was going well for us until the red card turning point.

The second half gave Carson several chances to show why Celtic were keen to sign him as the winter window ended.  He and his nine outfield players performed heroics as the eleven men camped in front of the packed South stand besieged our goal.

But they stood up to the test.  Dunn and Aldred formed the revised central pairing with Tait and Cadden as backs.  The rest built an outer wall and restricted goal scoring chances.

Stephen Robinson expressed his delight and said he was “extremely proud” of their effort and attitude.  He was 100% convinced that there should have been no red card and we can assume that an appeal will be successful.