Motherwell ended their Europa League campaign with a 3-0 loss to Hapoel Beer Sheva.

The final score delivered a losing margin that hardly reflected the majority of the game.  The home side deserved their win - they had shots on target while we did not but Motherwell will learn from the experience.

With  Bevis Mugabi suspended Nathan McGinley joined the starting eleven as we kicked off in the empty HaMoshava Stadium.  Motherwell showed no interest in lying deep and immediately put the opposition on the back foot. 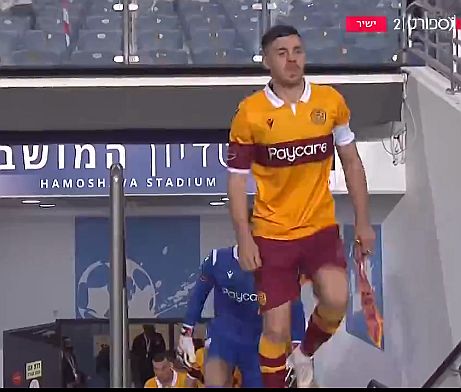 Gallagher leads the team out

The teams settled and a fairly even spell followed with no goal threat at either end.  Chris Long collected Tony Watt's cross and fired low across goal but off target.

Watt was the focus of several illegal challenges in what turned into a tousy game with yellow cards flying.

We were unfortunate to be a goal behind at the break.  Long conceded a needless free kick some thirty yards out on the touchline.  The delivery was whipped in behind the line and Vitor broke through to head beyond Trevor Carson. 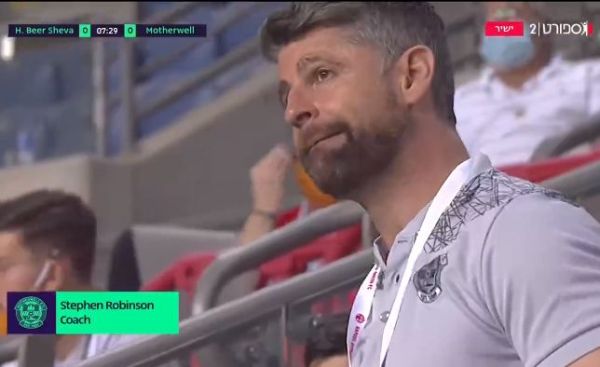 For much of the second half we had control but were unable to fashion anything on target.  Mark O'Hara and Declan Gallagher had attempts fly over the bar.

Disaster struck with twenty minutes left.  Gallagher received two yellow cards in as many minutes to leave us a man down and facing a penalty.  Josue scored to end the contest.  The captain trooped off knowing his lack of discipline had cost us.

Calum Lang and Jordan White replaced the hard working front pair but tiring legs faltered and Acultasa slammed into our net to end the scoring for the night.

The European journey is over for another year and Motherwell now have to turn up domestic form to see us back next season.