Motherwell fought hard for a 1-0 win against St Mirren in Paisley.  Kevin Van Veen scored the goal from the spot.

The players threw off the midweek hangover and delivered a wholehearted committed display and, with the help of some fantastic defending, secured a morale boosting win. 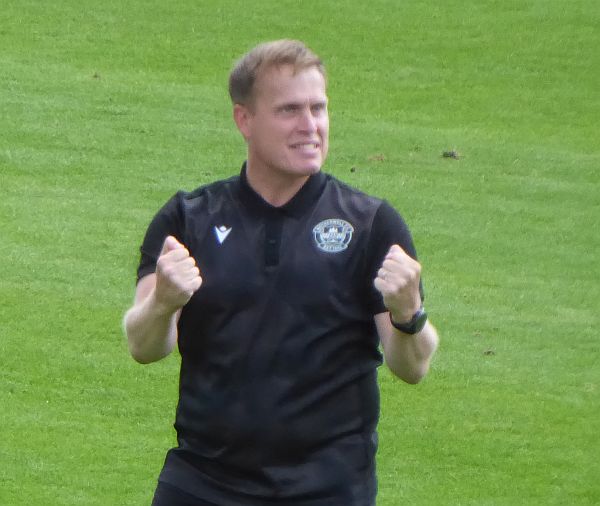 Goss got the game underway on the pristine, sunny surface with Liam Kelly defending the goal in front of the busy away stand. It took a while for the teams to settle and the ball was in the air (and over the stand) as defenders cleared.

Motherwell eased into better possession and much of the opening 20 minutes was spent in the St Mirren half.  Paul McGinn and Mark O’Hara clashed heads and Stephen O’Donnell came on to make his first appearance of the season.

The home side then had a purple spell and they had three clear chances to score.  The best came from a Erhahon header but Kelly produced the first of two outstanding saves to protect his goal.

Five minutes before the break the game turned.  Blair Spittal took a hopeful shot from the right of the box and it deflected off the arm of Tanser.  John Beaton pointed to the spot and Kevin Van Veen converted with ease.

St Mirren dominated the ball in the second period but failed to score.  Kelly produced another world class save from a Curtis Main header.  The guardian’s wonderful performance secured the points but Ricki Lamie also deserves credit for his five star display of defending.  Unfortunately his over enthusiastic tackle at the edge of the dee earned an instant red card.

A debut appearance of Kian Spiers was blunted somewhat by his booking after five minutes but that will not prevent him from enjoying a win bonus.

We had to endure five additional minutes that saw more deep defending but the final whistle prompted a few Twist and Shout choruses.

Stevie Hammell had delivered a first opening day win in six seasons and he joined his players to applaud the travelling support.p