Motherwell fall short of a point

A second half penalty gave Rangers a narrow 2-1 win over Motherwell but Stephen Robinson can be pleased with the spirit shown by his side.

We were overrun in the first quarter of the game and fortunate to escape that fraught period only one goal down but Heneghan’s header just before the break offered hope.  A much improved second half might have seen a point salvaged had either of the two late chances fallen our way. 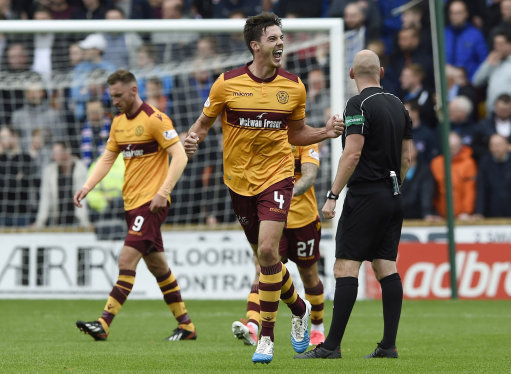 Rangers started the game in great form and they had an early boost when the ball fell to Dorrans just outside the box.  His strike skidded off the wet turf, deflected off Heneghan and with Carson unsighted, into the net.  The visitors were eager for more and the Cooper goal was fortunate to survive unscathed as or defence struggled to cope.  Windass deserves a mention for his mazy run that ended with a shot off the post.

But we survived and Frear began to tease the opposition and some deliveries started to flow from the left wing.  Heneghan got his head to Tanner’s free kick and we made the changing room with the game level.

In 58 minutes the game turned when Moult fouled Cardoso while defending a corner and referee Madden awarded a penalty.  Moult was booked and Dorrans scored from the spot.

Robinson rang the changes and we adopted a more aggressive shape.  In 74 minutes Cadden sent a well placed cross from the right and Bowan’s flick clipped the post with Foderingham beaten.  In the final minutes Fisher burst though to get a touch of a loose defensive ball.  It spun off the ‘keeper and seemed net bound until the spin moved the ball to the wrong side of the post as it bounced.

There were enough signs from Motherwell to offer some encouragement despite the loss.