Two goals in each half gave Celtic a comfortable win at Fir Park.  Declan Gallagher got Motherwell on the score sheet with a consolation.

It was not Motherwell’s worst performance of the season but they were no match for Celtic.  The visitors had the better chances and could have racked up a bigger margin but an improved show in the second half from the hosts kept the score to 4-1. 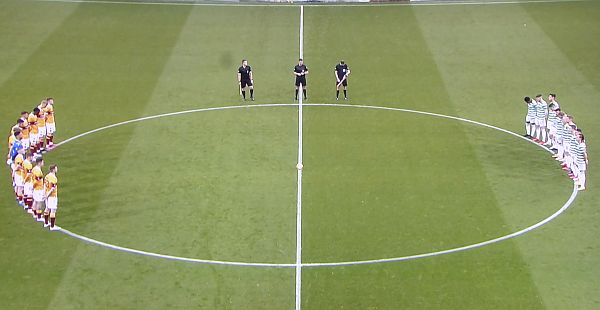 An unchanged Motherwell eleven kicked off under the floodlights despite the noon start on a chilly November Sunday.

The first goal followed a careless pass back by Liam Polworth.  Under no real threat he faced his own goal and passed to ball to the feet of Ajeti.  The striker hit the post with his low drive and Elyonoussi tapped in the rebound.  Only six minutes had elapsed.

Motherwell worked back into the game and seemed to have earned a penalty when Scott Brown felled Callum Lang but referee Dallas was not convinced.

Celtic scored their second after 26 minutes following a run into the box and a cut back from Frimpong. Elyonoussi was on hand to find the net.

We avoided a third just before the break when Christie ended a Celtic break by firing high with the goal at his mercy.

Stephen Robinson's team talk gave his men added purpose as the second period got underway.  More of the game took place in the visitors' half and a reward arrived with 25 minutes remaining.  Polworth sent a free kick 40 yards to find Declan Gallagher at the far post.  His header across goal gave Bain no chance and the score was 2-1.

Hopes of a recovery were soon dashed.  Elyonoussi completed his hat-trick when he rose high above his marker to head beyond Aaron Chapman.

Tony Watt was subbed moments after he had been booked for a foul on Brown and his replacement Callum White almost scored with his first touch.  Celtic were not done and Ntcham added a fourth as the defence slept.

The upcoming international break will afford some welcome recovery time for Motherwell’s injured list to shorten before the game at McDiarmid Park in a fortnight.