Motherwell get back to form with a win at Rugby Park 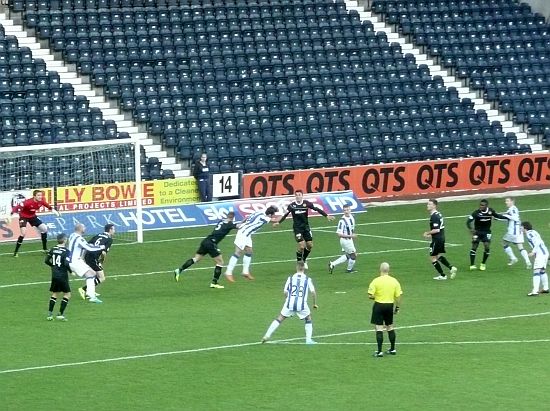 For the second game in a row Motherwell made four changes.  Craig Moore was given a start and he joined McFadden in support of Sutton.  Hutchinson was back alongside McManus in central defence with Kerr and Francis-Angol retaining their full back places.  Lasley and Vigurs were given Lawson for midfield company.

Kilmarnock kicked off and we defended the goal that had the away support housed in the upper section of the stand.  The best of the early chances came our way and young Moore will feel he should have found the net.  There were two shots from the right side of the box, one high and the other inches wide of the right hand post, while another followed a Francis-Angol cross that lead to a snap shot from ten yards but the snatched effort was weak.

Boyd gave the home support reason to get excited after 30 minutes when he seemed to weave his way through our central defence but he was swamped before he could shoot.  Sutton forced Samson into a fine save with a powerful header following a fine move on the right wing.  Kerr was the beneficiary of a one-two with McFadden and he delivered an inviting cross for the striker.

Ainsworth replaced McFadden at the break and he could have given us the lead with his first touch.  Moore got the better of his marker and the ball fell kindly for the winger but he failed to hit the target.  However, the substitute played a vital part in the opener that followed ten minutes into the second half.  Ainsworth collected deep on the right and his low delivery raced across to Vigurs on the left.  He delivered for Sutton to score with a well placed header.  Given the chances made it was a lead we deserved.

Nielsen produced an excellent low one handed save from Boyd to prevent a quick equaliser but he was a spectator when the striker failed to hit the target with a tempting header.  Kilmarnock withdrew Nicholson for McKenzie and stepped up the pace but there was a growing frustration in the home stands.

Anier was fielded for the last ten minutes and Moore received a healthy round of applause for his contribution.  Sutton could have killed the game but his shot flew over the bar.  His striking partner did just that two minutes from time.  Anier got on to the end of a Lasley pass inside the box and turned his man before stroking the ball into the far corner of the net.

It was a fine win and sets us up nicely for the big Lanarkshire cup derby!