Motherwell grind out a win over Dundee

Motherwell fought hard to earn a 1-0 win over a decent Dundee side at Fir Park.  Tony Watt scored the goal and was by a stretch the man of the match.

If ever proof was needed to show that there is no requirement to be the better footballing side on order to win the game, this was it.  Dundee had the lion’s share of the ball and for the most part moved it well but they were undone by poor finishing and Tony Watt’s inspirational head. 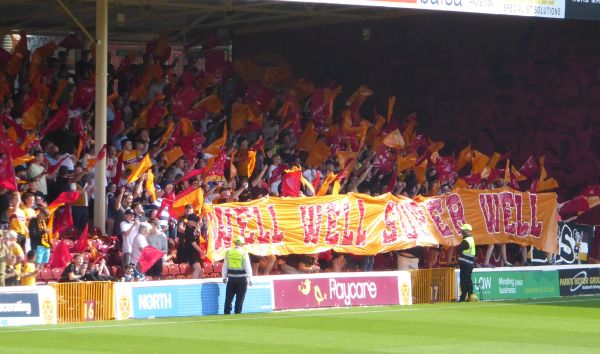 Graham Alexander stuck by the eleven that secured three points at Livingston last week and all looked good as Justin Amaluzor kicked off to the roar of the fans in the Hunter Stand.

The thrill of the returned crowd was soon muted as the visitors took immediate control.  They sprayed passes with an efficiency that was not present at any time for the home side.

Dundee might have got an early reward for their pressure when Paul McMullan’s shot beat Liam Kelly.  The ball bounced down from the bar but remained in play.  It was a warning that had to be heeded.

Motherwell engineered a first decent string of possession on the half hour and it seemed that Watt would score as he almost dribbled the ball goalward but a weak finish allowed a defensive clearance on the line.

He was not to be denied and when Amaluzor won a free kick thirty yards out on the right wing the goal followed.  Jake Carroll came over from his left back slot to deliver the ball into the penalty area.  Watt was facing the kicker and glanced a backward header that beat the ‘keeper to send Motherwell ahead. 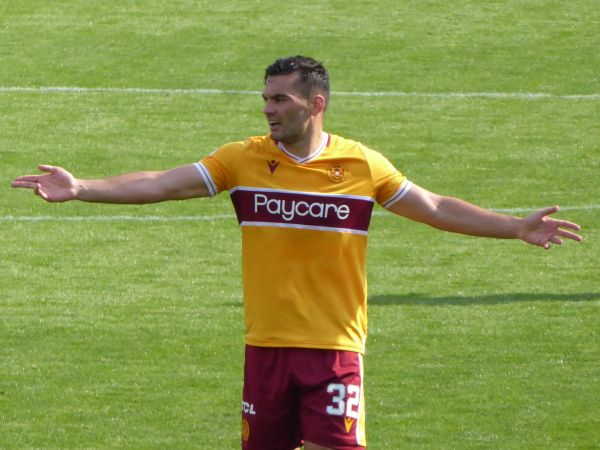 An easy choice for man of the match

The second half followed much the same pattern as the first.  Motherwell constantly resorted to long forward balls that were soon fodder for another advance by the Dark Blues.  Still, they lack the guile to test Kelly with the regularity that their possession merited.  When called upon the guardian was up to the task.

Kevin Van Veen and Sean Goss replaced Woolery and Amaluzor and for a few minutes we pushed forward.

Willie Collum then felt the need to wave a few cards.  KVV was booked for disputing a throw-in then Carroll earned red card for a two footed attempt on Anderson.  Kelly then followed with another caution.

Dundee were unable to take advantage of their superior numbers and after a nervous four added minutes the players and fans were able to celebrate the result if not the performance.

Back to back wins sets the team up nicely for the international break.  We return to Fir Park in a fortnight to face Aberdeen.