The final Lanarkshire derby of the season ended 1-1 as a costly late error by Motherwell gifted Hamilton a draw they barely deserved.  We dominated the first half but failed to press our advantage in the second.

Stephen Robinson made two changes from the team that lost to Rangers a fortnight ago.  Curtis Main and Jake Hastie missed out as James Scott and Elliott Frear took the starting berths. 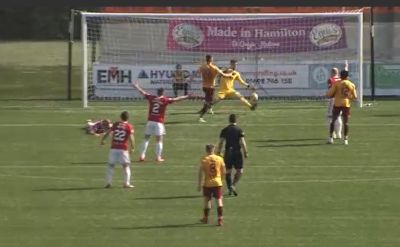 The game was played out in brilliant sunshine with the fans in summer attire.  Although the travelling support packed the away stand there was little of a derby atmosphere on show. Maybe that was caused by the open nature of New Douglas Park but more likely the lack of fighting spirit shown by our hosts.

James Scott almost opened our account after five minutes when he fired a decent shot on target.  Ariyibi was wasteful with a free kick from tempting range but his effort flew high.

Motherwell took the lead after half an hour following good work on the right wing.  Frear passed to Liam Grimshaw who turn inside before delivering an inch perfect left footed ball inside the area.  David Turnbull escaped his marker to beat Woods with a side foot volley.

After what was probably a severe tongue lashing at the break Hamilton tried to force themselves into the game but after 55 minutes Brian Rice threw on Marios Agboe and George Oakley.  Our reply was to remove Frear and add Chris Cadden.  Within minutes our boy hit the bar with a floated cross.

Scott was replaced by Conor Sammon (much to the ‘Well fans’ disbelief) then Ariyibi was pulled as Jake Hastie came on for the final 15 minutes.

We stumbled badly inside the last ten minutes when Grimshaw mis-hit a pass back.  Ogboe pounced on the weak return and scored.  We had offered Hamilton an unwarranted lifeline but despite a spirited attempt in the closing minutes the game ended level.

Four games to go...next up Dundee.