Motherwell romped to a 4-0 win over Ross County showing no hangover from the long lay-off.

It took some time before Motherwell’s dominance was to show.  An indifferent display from both sides in the first period was to be swept aside with a productive second half showing. 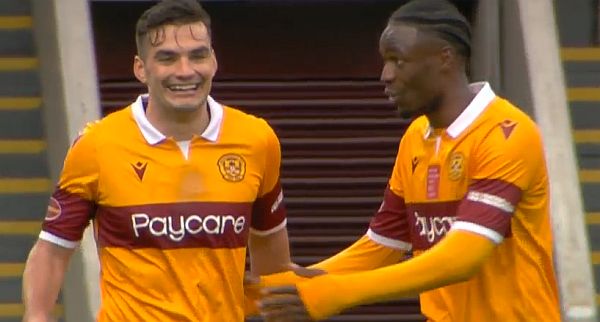 Watt and Cole among the scorers - credit to MFC TV

Ross County got the game underway against a much changed Motherwell side.  We started with four changes from the last outing four weeks ago.

The contest failed to spark as neither side was able to take command.  The few attempts on goal caused the 'keepers no discomfort until Tony Watt got on the end of Nathan McGinley's pinpoint cross ten minutes before the break.

The goal was well worked.  Stephen O'Donnell took a throw-in to Liam Polworth deep in our half.  McGinley collected on the left wing at half-way and set off before delivering the ball to Watt.  The striker was under pressure inside the six yard box but he got the telling touch.

A first half substitution was needed following an injury to Trevor Carson.  That prompted a debut for newly signed Aaron Chapman in goal.  The replacement was delighted to see Declan Gallagher clear off the goal line in first half added time.

While the first half was a fairly even affair there was no question about Motherwell's control of the second.  A further three goals sent the Highlanders home well beaten.

The second goal came in 53 minutes from the spot as Mark O'Hara scored low to Doohan's left.  The penalty was awarded after Iacovitte ended Watt's charge into the area.  That prompted an increasingly confident Motherwell to look for more.

The third came after the hour when Gallagher rose to head Polworth's corner kick back into the centre.  Callum Lang, just on and without a touch, was on hand to finish from close range.

The quartet was complete with the simplest of goals.  Chapman sent a ball into the centre circle.  Watt headed forward and Devante Cole latched on.  His precise placement wrapped up a successful day in claret and amber.